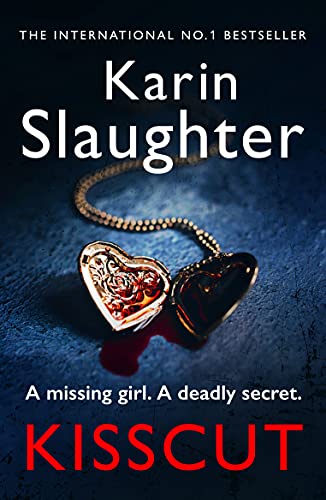 'One of the boldest thriller writers working today' TESS GERRITSEN
'Her characters, plot, and pacing are unrivalled' MICHAEL CONNELLY

The second book in Karin Slaughter's #1 bestselling GRANT COUNTY series.
_________________________________________
When a teenage quarrel in the small town of Heartsdale explodes into a deadly shoot-out, Sara Linton - paediatrician and medical examiner - finds herself entangled in a horrific tragedy. And what seems at first to be a terrible but individual catastrophe proves to have wider implications when the autopsy reveals evidence of long-term abuse and ritualistic self-mutilation.

Sara and police chief Jeffrey Tolliver start to investigate, but the children surrounding the victim close ranks. The families turn their backs. Then a young girl is abducted, and it becomes clear that the first death is linked to an even more brutal crime. And unless Sara and Jeffrey can uncover the deadly secrets the children hide, it's going to happen again...
_________________________________________
Crime and thriller masters know there's nothing better than a little Slaughter:

'I'd follow her anywhere' GILLIAN FLYNN
'Passion, intensity, and humanity' LEE CHILD
'A writer of extraordinary talents' KATHY REICHS
'Fiction doesn't get any better than this' JEFFERY DEAVER
'A great writer at the peak of her powers' PETER JAMES
'Raw, powerful and utterly gripping' KATHRYN STOCKETT
'With heart and skill Karin Slaughter keeps you hooked from the first page until the last' CAMILLA LACKBERG
'Amongst the world's greatest and finest crime writers' YRSA SIGURDARDOTTIR

A great read ... crime fiction at its finest -- Michael Connelly
A complex and confident thriller in which character goes deep * Daily Mirror *
With Blindsighted, Karin Slaughter left a great many thriller writers looking anxiously over their shoulders. With Kisscut, she leaves most of them behind -- John Connolly
Slaughter's plotting is relentless, piling on surprises and twists ... [Kisscut] should come with a psychological health warning * Guardian *
Fast-paced and unsettling ... A compelling and fluid read * Daily Telegraph *

Karin Slaughter is one of the world's most popular and acclaimed storytellers. Published in 120 countries with more than 35 million copies sold across the globe, her nineteen novels include the Grant County and Will Trent books, as well as the Edgar-nominated Cop Town and the instant New
York Times bestselling novels Pretty Girls, The Good Daughter, and Pieces of Her. This summer, Slaughter returns with her latest Will Trent instalment, The Last Widow. Slaughter is the
founder of the Save the Libraries project-a nonprofit organisation established to support libraries and library programming.

A native of Georgia, Karin Slaughter lives in Atlanta. Her standalone novels Pieces of Her, The Good Daughter and Cop Town are in development for film and television.

GOR003370517
Kisscut: (Grant County series 2) by Karin Slaughter
Karin Slaughter
Grant County
Used - Very Good
Paperback
Cornerstone
2011-06-23
448
0099553066
9780099553069
N/A
Book picture is for illustrative purposes only, actual binding, cover or edition may vary.
This is a used book - there is no escaping the fact it has been read by someone else and it will show signs of wear and previous use. Overall we expect it to be in very good condition, but if you are not entirely satisfied please get in touch with us.