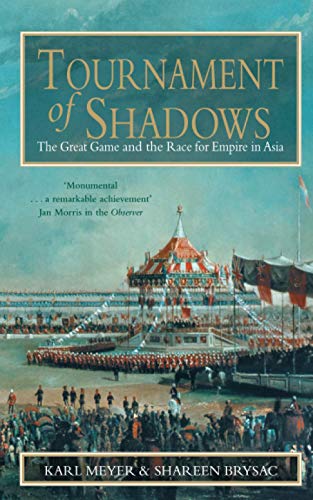 In Stock
£4.49
* Grand, sweeping, gripping narrative history at its best: an anecdotal, character-driven account of the race for empire in Asia that supersedes Peter Hopkirk's classic THE GREAT GAME
Good
Only 1 left

Tournament Of Shadows: The Great Game and the Race for Empire in Asia by Karl E. Meyer

The original Great Game (1800-1917), the clandestine struggle between Russia and Britain for mastery of Central Asia, has long been regarded as one of the greatest geopolitical conflicts in history. The prize, control of the vast Eurasian heartland, was believed by some to be the key to world domination. Teeming with improbable drama and exaggerated tensions, the conflict featured soldiers, mystics and spies, among them some of history's most colourful and romantic characters.

While the original Great Game ended with the Russian Revolution, the geopolitical wrangles for territory and power have continued into the late twentieth century - culminating in the Soviet invasion of Afghanistan. Karl Meyer and Shareen Brysac's magisterial one-volume survey chronicles nearly two centuries of conflict in vivid and compelling fashion.

Monumental . . . A remarkable achievement * Jan Morris, OBSERVER *
A scrupulously balanced and extremely readable chronicle . . . A book about cartography, achaeology, anthropology and several other things, as well as exploration and imperial lust * Geoffrey Moorhouse, GUARDIAN *
Terrific . . . Although this book is a big one, its pages race away * Nigel Jones, SUNDAY EXPRESS *
Entertaining, fluent and absorbing * INDEPENDENT ON SUNDAY *

Karl E. Meyer is a former London bureau chief for the WASHINGTON POST. His wife, Shareen Blair Brysac, is a prize-winning documentary-maker for CBS News.

GOR000990560
Tournament Of Shadows: The Great Game and the Race for Empire in Asia by Karl E. Meyer
Karl E. Meyer
Used - Good
Paperback
Little, Brown Book Group
2001-12-06
672
0349113661
9780349113661
N/A
Book picture is for illustrative purposes only, actual binding, cover or edition may vary.
This is a used book - there is no escaping the fact it has been read by someone else and it will show signs of wear and previous use. Overall we expect it to be in very good condition, but if you are not entirely satisfied please get in touch with us.