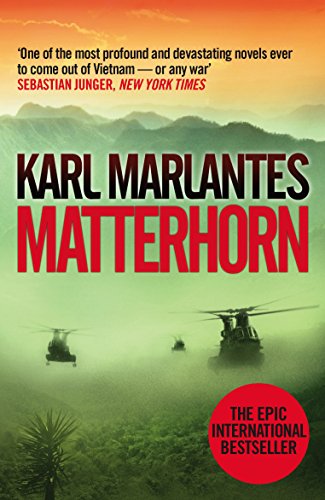 'One of the most profound and devastating novels ever to come out of Vietnam - or any war' Sebastian Junger, New York Times

Thirty years in the making, this towering, critically acclaimed and huge international bestseller is now available in paperback.

Fire Support Base Matterhorn: a fortress carved out of the grey-green mountain jungle. Cold monsoon clouds wreath its mile-high summit, concealing a battery of 105-mm howitzers surrounded by deep bunkers, carefully constructed fields of fire and the 180 marines of Bravo Company. Just three kilometres from Laos and two from North Vietnam, there is no more isolated outpost of America's increasingly desperate war in Vietnam.

Second Lieutenant Waino Mellas, 21 years old and just a few days into his 13-month tour, has barely arrived at Matterhorn before Bravo Company is ordered to abandon their mountain and sent deep in-country in pursuit of a North Vietnamese Army unit of unknown size.

Beyond the relative safety of the perimeter wire, Mellas will face disease, starvation, leeches, tigers and an almost invisible enemy. Beneath the endless jungle canopy, Bravo Company will confront competing ambitions, duplicitous officers and simmering racial tensions. Behind them, always, Matterhorn. The impregnable mountain fortress they built and then abandoned, without a shot, to the North Vietnamese Army...

'One of the most profound and devastating novels ever to come out of Vietnam - or any war' Sebastian Junger, New York Times 'Incredible - I came close to reading it in one sitting - I was living and dying in Vietnam with Bravo Company' Sunday Times 'Astonishing... A Vietnam novel of astonishing power and insight - the definitive Vietnam novel of our times - Marlantes steps alongside Stephen Crane, Joseph Heller and even Ernest Hemingway.' Observer 'That Marlantes served in Vietnam lends the book a rare and immersive veracity - bewildering and brilliantly rendered' The Times

A graduate of Yale University and a Rhodes Scholar at Oxford University, Karl Marlantes served as a Marine in Vietnam, where he was awarded the Navy Cross, the Bronze Star, two Navy Commendation Medals for valour, two Purple Hearts and ten air medals. This is his first novel.

GOR002682995
Matterhorn by Karl Marlantes
Karl Marlantes
Used - Very Good
Paperback
Atlantic Books
2011-05-01
736
1848874960
9781848874961
N/A
Book picture is for illustrative purposes only, actual binding, cover or edition may vary.
This is a used book - there is no escaping the fact it has been read by someone else and it will show signs of wear and previous use. Overall we expect it to be in very good condition, but if you are not entirely satisfied please get in touch with us.