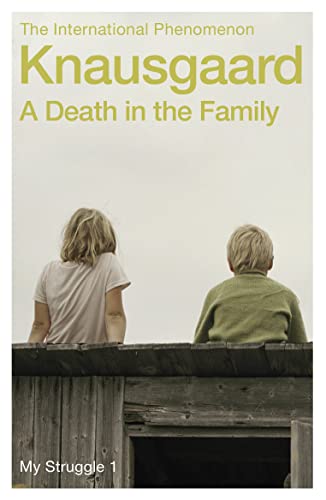 A Death in the Family
by Karl Ove Knausgaard

In Stock
£2.99
An addictive and searingly honest novel about childhood and grief from the international phenomenon, Karl Ove KnausgaardKarl Ove Knausgaard writes about his life with painful honesty.
Very Good Good
47 in stock

A Death in the Family Summary

A Death in the Family: My Struggle Book 1 by Karl Ove Knausgaard

An addictive and searingly honest novel about childhood and grief from the international phenomenon, Karl Ove Knausgaard Karl Ove Knausgaard writes about his life with painful honesty. He writes about his childhood and teenage years, his infatuation with rock music, his relationship with his loving yet almost invisible mother and his distant and unpredictable father, and his bewilderment and grief on his father's death. When Karl Ove becomes a father himself, he must balance the demands of caring for a young family with his determination to write great literature. Knausgaard has created a universal story of the struggles, great and small, that we all face in our lives. A profound and mesmerizing work, written as if the author's very life were at stake. `It's unbelievable... It's completely blown my mind' Zadie Smith

A Death in the Family Reviews

"A masterpiece... Meticulously detailed, harrowing, oddly beautiful, its depiction of a family's disintegration is one of the most powerful pieces of writing I've read in years" * Observer, Books of the Year *
"The best book I read this year...full of artistic, moral and technical daring" * Guardian, Books of the Year *
"Intense and vital...ceaselessly compelling...superb" * New Yorker *
"This suburban epic, electrifying in candour and eloquence, feels streets ahead of the comparable Jonathan Franzen" * Independent, Books of the Year *
"Incredibly moving" * Irish Times, Books of the Year *

Karl Ove Knausgaard's My Struggle cycle has been heralded as a masterpiece all over the world. From A Death in the Family to The End, the novels move through childhood into adulthood and, together, form an enthralling portrait of human life. Knausgaard has been awarded the Norwegian Critics Prize for Literature, the Brage Prize and the Jerusalem Prize. His work, which also includes Out of the World, A Time for Everything and the Seasons Quartet, is published in thirty-five languages.

GOR004716567
A Death in the Family: My Struggle Book 1 by Karl Ove Knausgaard
Karl Ove Knausgaard
My Struggle
Used - Very Good
Paperback
Vintage Publishing
2013-03-07
496
0099555166
9780099555162
Short-listed for IMPAC Dublin Literary Award 2014 (UK) Long-listed for Independent Foreign Fiction Prize 2013 (UK)
Book picture is for illustrative purposes only, actual binding, cover or edition may vary.
This is a used book - there is no escaping the fact it has been read by someone else and it will show signs of wear and previous use. Overall we expect it to be in very good condition, but if you are not entirely satisfied please get in touch with us.