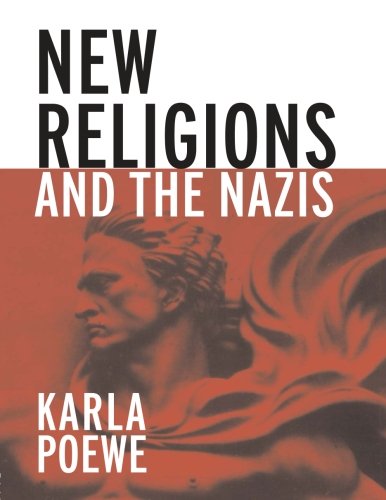 New Religions and the Nazis
by Karla Poewe (University of Calgary, Canada)

In Stock
£20.99
Sheds light on the contribution of new religions to the emergence of Nazi ideology in 1920s and 1930s Germany. This book addresses how and why Germans embraced National Socialism. This book adopts a different approach to the difficulties raised by this deeply significant period of history.
Very Good
Only 1 left

New Religions and the Nazis Summary

New Religions and the Nazis by Karla Poewe (University of Calgary, Canada)

This book sheds light on an important but neglected part of Nazi history - the contribution of new religions to the emergence of Nazi ideology in 1920s and 1930s Germany.

Post -World War I conditions threw Germans into major turmoil. The loss of the war, the Weimar Republic and the punitive Treaty of Versailles all caused widespread discontent and resentment. As a result Germans generally and intellectuals specifically took political, paramilitary, and religious matters into their own hands to achieve national regeneration. Taken together such cultural figures as Jakob Wilhelm Hauer, Mathilde Ludendorff, Ernst Bergmann, Hans F.K. Gunther, and nationalist writers like Hans Grimm created a mind-set that swept across Germany like a tidal wave. By fusing politics, religion, theology, Indo-Aryan metaphysics, literature and Darwinian science they intended to craft a new, genuinely German faith-based political community. What emerged instead was an anti-Semitic totalitarian political regime known as National Socialism. Looking at modern paganism as well as the established Church, Karla Poewe reveals that the new religions founded in the pre-Nazi and Nazi years, especially Jakob Hauer's German Faith Movement, present a model for how German fascism distilled aspects of religious doctrine into political extremism.

New Religions and the Nazis addresses one of the most important questions of the twentieth century - how and why did Germans come to embrace National Socialism? Researched from original documents, letters and unpublished papers, including the SS personnel files held in the German Federal Archives, it is an absorbing and fresh approach to the difficulties raised by this deeply significant period of history.

1. Introduction 2. An Overview 3. Hauer and the Bunde: Becoming a National Socialist 4. The Push toward Nazism: Youths and Leaders 5. Hauer's View of Religion 6. The Germanic-deutsch Leg of Hauer's German Faith 7. Organizational Help from Wehrwolf and the SS 8. Hauer and the War of Attrition against Christianity 9. Werner Best: Hauer's Reciever in the SS 10. The Faith of the Nationalists: Narrative and the Third Reich 11. Scientific Neo-Paganism and the Extreme Right Then and Today 12. Conclusion

GOR002657314
New Religions and the Nazis by Karla Poewe (University of Calgary, Canada)
Karla Poewe (University of Calgary, Canada)
Used - Very Good
Paperback
Taylor & Francis Ltd
2005-12-01
236
0415290252
9780415290258
N/A
Book picture is for illustrative purposes only, actual binding, cover or edition may vary.
This is a used book - there is no escaping the fact it has been read by someone else and it will show signs of wear and previous use. Overall we expect it to be in very good condition, but if you are not entirely satisfied please get in touch with us.