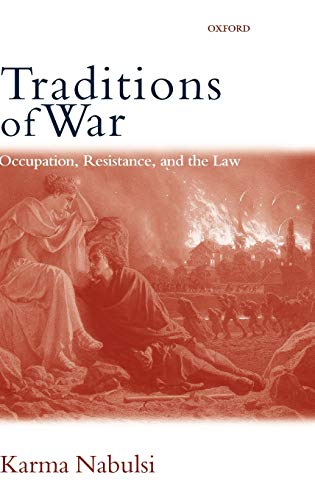 In Stock
£23.99
Traditions of War brings together developments in political and legal thought, the conduct of military occupations, and the attempts by the international community to regulate the treatment of civilians within this aspect of warfare.
Very Good
Only 1 left

Traditions of War examines wars and military occupation, and the ideas underlying them. The search for these ideas is conducted in the domain of the laws of war, a body of rules which sought to regulate the practices of war and those permitted to fight in it. This work introduces three ideologies: the martial, Grotian, and republican. These traditions were rooted in incommensurable conceptions of the good life, and the overall argument is that these differences lay at the heart of the failure fully to resolve the distinction between lawful and unlawful combatants at successive diplomatic conferences of Brussels in 1874, the Hague in 1899 and 1907, and Geneva in 1949. Based on a wide range of sources and a plurality of intellectual disciplines, this book places these diplomatic failures in their broader social and political contexts. By bringing out idealogical continuities and drawing on the social history of army occupation in Europe and resistance to it, this book both challenges and illuminates our understanding of modern war.

Politics, law and war are skilfully interwoven ... This is more a work of political thought than about the practice of war, but a reminder of the importance to military history of varied responses to occupation. * European History Quarterly *
This is a valuable and challenging book. * Military History *
Nabulsi's book demonstrates creativity of a very high order. Its strength lies in its inspired attempt to identify neglected strands in the history of international thought ... original and provocative, and also illustrated from impressively eclectic reading...thought provokng. * English Historial Review *

Introduction ; The Modern Laws of War from 1874 to 1949 ; Occupying Armies and Civilian Populations in Nineteenth Century Europe ; The Conceptualisation of War and the Value of Political Traditions ; High Priests of the Temple of Janus: The Martial Tradition of War ; The Enigma of the Middle Way: Grotius and The Grotian Tradition on War ; Hope and Heroic Action: Rousseau, Paoli, Kosciuszko, and the Republican Tradition of War ; Conclusion

GOR009957219
Traditions of War: Occupation, Resistance, and the Law by Karma Nabulsi (Nuffield College, Oxford)
Karma Nabulsi (Nuffield College, Oxford)
Used - Very Good
Hardback
Oxford University Press
1999-10-28
306
0198294077
9780198294078
N/A
Book picture is for illustrative purposes only, actual binding, cover or edition may vary.
This is a used book - there is no escaping the fact it has been read by someone else and it will show signs of wear and previous use. Overall we expect it to be in very good condition, but if you are not entirely satisfied please get in touch with us.