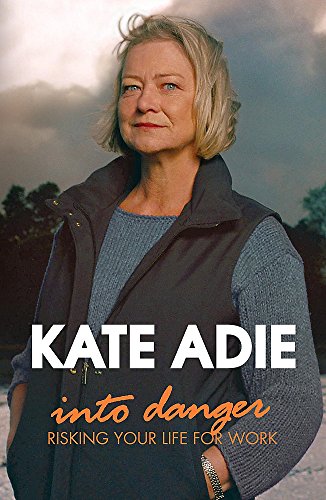 Into Danger
by Kate Adie

In Stock
£3.29
Bestselling author and the most famous woman in a flak jacket Kate Adie sets out on a fascinating journey to discover just who is attracted to living dangerously - and why.
Very Good
7 in stock

Into Danger by Kate Adie

'Reported with skill and personal insight' The Times

Bestselling author and the most famous woman in a flak jacket Kate Adie sets out on a fascinating journey to discover just who is attracted to living dangerously - and why.

Ever since her days as a reporter on the front line in Iraq and the Iranian Embassy siege in London, Kate Adie has earned her reputation as one of the most intrepid women of her day. Throughout her career she has regularly reported from the world's most dangerous war zones - often placing her own life at serious risk.

It has given her a curiosity about the people who are attracted to danger. Why when so many are fearful of anything beyond their daily routine, are others drawn towards situations, or professions which put them in regular peril of their lives?

It has proved a fascinating quest that has taken her to the four corners of the globe in pursuit of an answer. She has met those who choose a career in danger, like stuntpeople, landmine exploders, and even a 'snake man' who - aged 96 - has been bitten countless times by poisonous snakes to find venom for vaccines. She has questioned those whose actions put them in danger, like Sir Richard Leakey whose determination to speak out in Kenya nearly cost him his life, as well as criminals and prostitutes who risk all for money. And of course there are those who - through no choice of their own - have been put in danger, such as Saddam Hussein's food taster - not his career of choice.

With Kate's insight, wit, and gift for illumination, this is a compelling read.

A great theme, reported with skill and personal insight * The Times *

Kate Adie became a household name through her work as the BBC`s chief news correspondent, reporting major stories and from war zones around the world. She has won numerous awards including two Royal Television Society awards, the Bafta Richard Dimbleby Award, and the Broadcasting Press Guild`s Award for Outstanding Contribution to Broadcasting. She was awarded an OBE in 1993. Kate Adie presents From Our Own Correspondent on BBC Radio 4 and is the author of several bestselling books.

GOR001185612
Into Danger by Kate Adie
Kate Adie
Used - Very Good
Paperback
Hodder & Stoughton General Division
2009-04-02
320
0340933224
9780340933220
N/A
Book picture is for illustrative purposes only, actual binding, cover or edition may vary.
This is a used book - there is no escaping the fact it has been read by someone else and it will show signs of wear and previous use. Overall we expect it to be in very good condition, but if you are not entirely satisfied please get in touch with us.