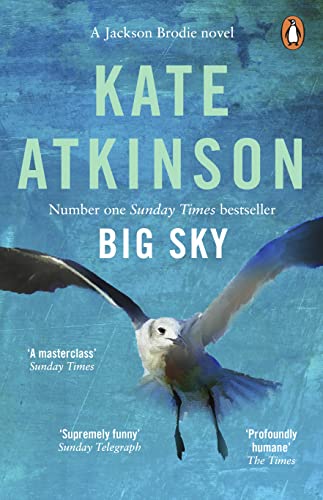 THE NUMBER ONE SUNDAY TIMES BESTSELLER: THE RETURN OF JACKSON BRODIE, 'LIKE ALL GOOD DETECTIVES, A HERO FOR MEN AND WOMEN ALIKE' (The Times)

'Big Sky is laced with Atkinson's sharp, dry humour, and one of the joys of the Brodie novels has always been that they are so funny' (Observer)

Jackson Brodie has relocated to a quiet seaside village in North Yorkshire, in the occasional company of his recalcitrant teenage son Nathan and ageing Labrador Dido, both at the discretion of his former partner Julia. It's a picturesque setting, but there's something darker lurking behind the scenes.

Jackson's current job, gathering proof of an unfaithful husband for his suspicious wife, seems straightforward, but a chance encounter with a desperate man on a crumbling cliff leads him into a sinister network-and back into the path of someone from his past. Old secrets and new lies intersect in this breathtaking new literary crime novel, both sharply funny and achingly sad, by one of the most dazzling and surprising writers at work today.

The main plot...is dark and disturbing, but Atkinson brings wry comic touches to the story as she both playfully inhabits and deftly subverts the crime genre. * Observer *
Big Sky is laced with Atkinson's sharp, dry humour, and one of the joys of the Brodie novels has always been that they are so funny. * Observer *
Atkinson weaves a magically absorbing world full of crossed paths and coincidences. Her sublime turn of phrase, impeccable gallows humour, beautifully drawn characters and complex plotting make for a fabulously entertaining and moving book. It can be enjoyed as either a standalone mystery or a very welcome reunion with an old friend. * Sunday Mirror *
A masterclass in what can be done with crime fiction, brilliantly using the form to expose what Atkinson bleakly describes as 'one more battle in the war against women'. * Sunday Times *
Atkinson's new mystery hits all the right notes * Sunday Times Style *
Atkinson brings back her much-loved PI Jackson Brodie for a tightly plotted tale...the real mystery here is the human heart, with Atkinson serving up an acute and believable look at the state of Britain today. * i *
I romped through it: as ever, the plotting is clever and complex, it's full of the dry wit Atkinson is so good at and it's an absorbing mystery. * Good Housekeeping *
There's a lot going on here, all of it rendered with Atkinson's vastly enjoyable nonchalance...Atkinson tells a great story, toys with expectations, deceives by omission, blows smoke and also writes like she's your favourite friend. Thank goodness the long Jackson Brodie hiatus is over. * New York Times *
Atkinson throws in many entertaining diversions, and a fair few juicy red herrings... an exuberant, entertaining read...Atkinson's work is always playful, and there's a brisk, jaunty tone to Big Sky and much dry observational comedy. * Independent *
The brilliance of Big Sky lies in its broad range of memorable characters, each with their own intriguing backstory.....sharp humour,sparkling prose and acute psychological insight. * Daily Express *
A stunning comeback... Told in Atkinson's typically wry prose, it is Dickensian in sweep, utterly riveting and has a wonderful ending, quite magnificent. * Daily Mail *
I can't get enough of Jackson Brodie...he may well be the great fictional detective of our age...her bunch of seemingly ordinary but deeply fascinating characters... seem so real that you come to care about them like your oldest friends. * Sunday Express *
As usual, it's ingeniously structured and told with humour and compassion. * New Statesman *
Her peerless ability to plot with audacity and with a sinuous beauty...it's the most marvellous book, so delightful you'll want to eke it out for as long as possible. * Radio Times *
Jackson Brodie gets his fifth outing in the new novel by the reliably brilliant Atkinson. * Woman & Home *
You can't go wrong with the majestic new Kate Atkinson book...wise, funny and sad. * Stylist *
Jackson Brodie is back and how we've missed him....you're in for a treat. * Red *
How can anyone fail to love Kate Atkinson?...A gripping beach read for lovers of detective fiction. * ES magazine *
Atkinson's nimble and endearing skill across all her fiction...is to take the determinedly domestic, find the wry, sometimes waspish humour in it, and yet reveal something profoundly humane....And deft misdirection, cheeky literary references and Brodie's flailing attempts to offer sympathy by quoting country-and-western lyrics are constantly entertaining. You finish Big Sky feeling battered - but thoroughly cheered up. * The Times *
With a many-tentacled storyline distilling some of the more disturbing headlines of recent years, this dark material proves supremely compulsive...Brodie brings out the best in Atkinson, partly because he's a handy peg for what tends to come across as her regretful sense of bemusement about modern Britain. * Metro *

Kate Atkinson is one of the world's foremost novelists. She won the Costa Book of the Year prize with her first novel, Behind the Scenes at the Museum. Her three critically lauded and prizewinning novels set around World War II are Life After Life, A God in Ruins (both winners of the Costa Novel Award), and Transcription. She was appointed MBE for services to literature in 2011.

GOR010371349
Big Sky by Kate Atkinson
Kate Atkinson
Jackson Brodie
Used - Like New
Paperback
Transworld Publishers Ltd
2020-01-21
496
0552776661
9780552776660
N/A
Book picture is for illustrative purposes only, actual binding, cover or edition may vary.
This is a used book - there is no escaping the fact it has been read by someone else and it will show signs of wear and previous use. Overall we expect it to be in very good condition, but if you are not entirely satisfied please get in touch with us.