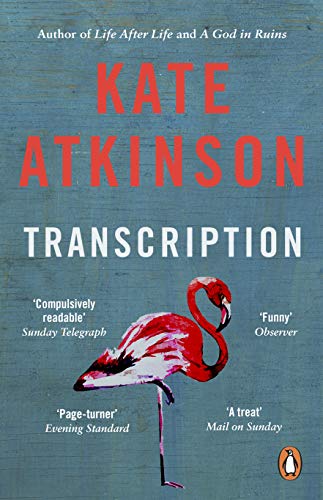 In Stock
£3.59
______________THE NO.1 SUNDAY TIMES BESTSELLER BY AWARD WINNER KATE ATKINSON'An unapologetic novel of ideas which is also wise, funny and paced like a thriller' ObserverIn 1940, eighteen-year old Juliet Armstrong is reluctantly recruited into the world of espionage.
Like New Very Good Good Well Read
7 in stock

______________ THE NO.1 SUNDAY TIMES BESTSELLER BY AWARD WINNER KATE ATKINSON 'An unapologetic novel of ideas which is also wise, funny and paced like a thriller' Observer In 1940, eighteen-year old Juliet Armstrong is reluctantly recruited into the world of espionage. Sent to an obscure department of MI5 tasked with monitoring the comings and goings of British Fascist sympathizers, she discovers the work to be by turns both tedious and terrifying. But after the war has ended, she presumes the events of those years have been relegated to the past for ever. Ten years later, now a producer at the BBC, Juliet is unexpectedly confronted by figures from her past. A different war is being fought now, on a different battleground, but Juliet finds herself once more under threat. A bill of reckoning is due, and she finally begins to realize that there is no action without consequence. Transcription is a work of rare depth and texture, a bravura modern novel of extraordinary power, wit and empathy. It is a triumphant work of fiction from one of this country's most exceptional writers. 'How vehemently most novelists will wish to produce a masterpiece as good' Telegraph ______________

"No other contemporary novelist has such supreme mastery of that sweet spot between high and low, literary and compulsively readable as Kate Atkinson. I look forward to a new Atkinson book like I look forward to Christmas...what lends the novel enchantment is that patented Atkinson double whammy: gravity and levity. Tragedy and comedy as so skilfully entwined that you find yourself snorting with mirth...brimming with dark wit that reminds you how deeply satisfying good fiction can be." -- Allison Pearson * Sunday Telegraph *
"Transcription stands alongside its immediate predecessors as a fine example of Kate Atkinson's mature work, an unapologetic novel of ideas which is also wise, funny and paced like a thriller." -- Stephanie Merritt * Observer *
"Kate Atkinson is a wonderful writer. I want to write like her when I grow up. Transcription shows she's at the peak of her powers. Full of beautiful, delicate, sharp sentences and characterisations. A spy novel that dismantles the whole genre. A class act, as ever." -- Matt Haig
"Superb...Transcription is the sort of book that reminds you how profound and satisfying and moving and exhilarating good fiction can be. It's the best novel I've read all year. I can't praise it enough." * Irish Times *
"Never loses its sense of absurdity of human beings even in their most tragic or noble moments...How vehemently most novelists will wish to produce a masterpiece as good." -- Jake Kerridge * Daily Telegraph *
"On a graph plotting the literary qualities versus saleability of contemporary British novelists, Kate Atkinson would surely occupy the highest point where the two meet...There are plenty of twists and turns in this terrific page-turner, some shocking moments, and a narrator whom the author encourages us to love." -- Claire Harman * Evening Standard *
"Atkinson handles her mazy, Le Carre-style plot with complete authority. But there's a lot more to the novel than its page-turning thrills. The increasingly sceptical Juliet makes for a very appealing heroine and the darker material is interspersed with some neat comedy. Above all, Atkinson recreates the atmosphere of both wartime and post-war London with utter conviction." -- James Walton * Reader's Digest *
"[A] superb story of wartime espionage...Hilary Mantel once said of Atkinson's ground-breaking first novel that she had a "game-plan more sophisticated than Dickens", and that skill is more than evident in this latest offering...remarkable...Transcription is a fine course in the art of deception. The sheer bravura of Atkinson's storytelling is such that you will find it impossible not to want to revisit those clues so cleverly placed, as you shake your head in disbelief at how effortlessly you have been taken in." -- Gerri Kimber * Times Literary Supplement *
"A new Kate Atkinson novel is always a reason to rejoice and Transcription was everything I was hoping for and more...The truly surprising denouement makes for one of the best conclusions of a novel I've ever read.I immediately wanted to read it all over again." * Red *
"Kate Atkinson's fluid identity as a novelist has long marked her out as one of Britain's most interesting - and often underrated - writers...the playful always stands shoulder to shoulder with the painful, the grandiose with the grubby...Atkinson's depiction of espionage and counter-espionage on the Home Front is nimble and convincing...But there is an immensely serious book here too, waiting in the wings to reveal itself on the very last pages; a book that asks us to question the entertainment we've just gobbled up, and to reckon with what lies beneath it." -- Alex Clark * New Statesman *
"A treat - cerebral and suspenseful, playful and empathetic." * Mail on Sunday *
"This is a novel about identity in which no one and nothing is exactly as they seem - a spy novel, in short... Terms such as "postmodern" and "metafiction" seem far too heavy for novels as enjoyable as Atkinson's, but from Behind the Scenes onwards she has been chipping away at the fourth wall, and mischievously drawing attention to her craft. What elevates her fiction above mere playfulness is the emotional integrity of her characters... Atkinson always puts on a damn good show." -- Lisa Allardice * Guardian *
"A triumph...inventive, atmospheric and witty." * Good Housekeeping *
"Full of intrigue...sublimely suspenseful - droll,devious and deadly, beautifully serious." * Sunday Express *
"In Transcription, Kate Atkinson recasts the bildungsroman within the fertile genre of the spy thriller... ...As the plot of this accomplished novel hurtles towards its astonishing denouement, even the canniest reader may feel wrong-footed." -- Pamela Norris * Literary Review *
"I loved Kate Atkinson's Transcription - you don't know if it's farce about spies, or a spy story about farce." -- Hanya Yanagihara
"This intricate and captivating novel is a treat. Our advice? Cancel your plans and get lost in its pages." * Heat *
"Intricate, compelling, unpredictable...a gripping spy story ...filled with the mystery, humour, and Britishness we have come to expect." * Stylist *
"Murky, mysterious and with double bluffs,divided loyalties and untrustworthy narratives aplenty, Atkinson explores the nature of truth in this vibrant piece of historical fiction." * Psychologies *
"Atkinson's poker-faced narration perfectly serves a twisty tale of innocence lost amid a fog of geopolitical double-dealing, framed with a deadly tragedy." * Metro *
"Glorious... beautiful and smart and everything you have ever loved about Kate Atkinson." -- Joanna Cannon
"Totally gripping and extremely funny, with an excellent joke on practically every page...There won't be a better or more enjoyable book published this year." -- Cressida Connolly * The Oldie *

Kate Atkinson is one of the world's foremost novelists. She won the Costa Book of the Year prize with her first novel, Behind the Scenes at the Museum. Her three critically lauded and prizewinning novels set around World War II are Life After Life, A God in Ruins (both winners of the Costa Novel Award), and Transcription. She was appointed MBE for services to literature in 2011. Her bestselling literary crime novels featuring former detective Jackson Brodie, Case Histories, One Good Turn, When Will There Be Good News? and Started Early, Took My Dog became a BBC television series starring Jason Isaacs. Jackson Brodie returns in her new novel Big Sky.

GOR009879829
Transcription by Kate Atkinson
Kate Atkinson
Used - Like New
Paperback
Transworld Publishers Ltd
2019-03-21
416
0552776653
9780552776653
N/A
Book picture is for illustrative purposes only, actual binding, cover or edition may vary.
This is a used book - there is no escaping the fact it has been read by someone else and it will show signs of wear and previous use. Overall we expect it to be in very good condition, but if you are not entirely satisfied please get in touch with us.