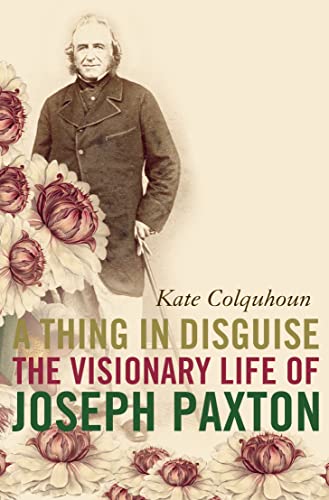 A Thing in Disguise
by Kate Colquhoun

A brilliantly conceived biography of Joseph Paxton, horticulturist to the Duke & Duchess of Devonshire at Chatsworth, architect of the Crystal Palace at the Great Exhibition of 1851 and one of the greatest unsung heroes of the Victorian Age

A Thing in Disguise Summary

A Thing in Disguise: The Visionary Life of Joseph Paxton by Kate Colquhoun

A brilliantly conceived biography of Joseph Paxton, horticulturist to the Duke & Duchess of Devonshire at Chatsworth, architect of the Crystal Palace at the Great Exhibition of 1851 and one of the greatest unsung heroes of the Victorian Age

In the nineteenth century, which witnessed a revolution in horticulture and urban planning and architecture, Joseph Paxton, a man with no formal education, strode like a colossus. Head gardener at Chatsworth by the age of twenty-three, and encouraged by the sixth Duke of Devonshire whose patronage soon flourished into the defining friendship of his life, Paxton set about transforming this Derbyshire estate into the greatest garden in England. Visitors there were astonished by the enormous glasshouses and ambitious waterworks he built, the collection of orchids, the largest in all England, the dwarf bananas and the gargantuan lily, the trees and plants brought back from all over the world. Queen Victoria came to marvel and, increasingly, with the development of the railway in which Paxton was also involved, daytrippers from all over the country.

It was the Crystal Palace, home of the Great Exhibition in 1851, that secured Paxton's fame. His design, initially doodled on a piece of blotting paper, was the architectural triumph of its time. Two thousand men worked for eight months to complete it. It was six times the size of St Paul's Cathedral, enclosed a space of 18 acres, and entertained six million visitors. By the time of his death fourteen years later, 'the busiest man in England' according to Dickens, was friends with Brunel and Stevenson and in constant demand to design public parks and gardens. His last, seemingly most eccentric project was for a Great Boulevard under glass, a crystal arcade that would connect all the main railway termini in London.

Drawing on exclusive access to Paxton's personal letters, Kate Colquhouns's remarkable biography is a compelling story of a man who typifies the Victorian ideal of self-improvement and a touching portrait of one of that era's great heroes.

A Thing in Disguise Reviews

`Kate Colquhoun should have a bestseller on her hands.' Cressida Connolly, Saturday Telegraph

'Kate Colquhoun has written an exemplary life of this important and attractive personality. Hopefully this is the first of many.' Aileen Reid, Sunday Telegraph

`Colquhoun's sympathetic biography is at its most revealing (indeed, its most moving) in its analysis of the friendship between duke and gardener, two like minds meeting despite the barriers of class and convention.' Sunday Times

Kate Colquhoun lives in west London and is a keen gardener. `A Thing in Disguise' is her first book.

GOR001167944
A Thing in Disguise: The Visionary Life of Joseph Paxton by Kate Colquhoun
Kate Colquhoun
Used - Very Good
Paperback
HarperCollins Publishers
2004-05-04
320
0007143540
9780007143542
N/A
Book picture is for illustrative purposes only, actual binding, cover or edition may vary.
This is a used book - there is no escaping the fact it has been read by someone else and it will show signs of wear and previous use. Overall we expect it to be in very good condition, but if you are not entirely satisfied please get in touch with us.