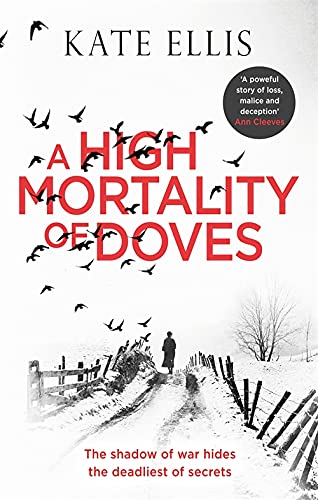 A High Mortality of Doves
by Kate Ellis

A High Mortality of Doves Summary

A High Mortality of Doves by Kate Ellis

1919. The Derbyshire village of Wenfield is still reeling from four terrible years of war, and now, just when the village is coming to terms with the loss of so many of its sons, the brutal murder of a young girl shatters its hard-won tranquillity.

Myrtle Bligh is found stabbed and left in woodland, her mouth slit to accommodate a dead dove, a bird of peace.

During the war Myrtle worked as a volunteer nurse with Flora Winsmore, the local doctor's daughter, caring for badly wounded soldiers at the nearby big house, Tarnhey Court.

When two more women are found murdered in identical circumstances, Inspector Albert Lincoln is sent up from London, a man not only wounded in war but damaged in peace by the death of his young son and his cold, loveless marriage. Once in Wenfield, Albert begins to investigate the three recent murders and the Cartwright family of Tarnhey Court and their staff fall under suspicion as their hidden lives and secrets are uncovered.

With rumours of a ghostly soldier with a painted face being spotted near the scene of the murders, the village is thrown into a state of panic - and with the killer still on the loose, who will be the next to die at the hands of this vicious angel of death?

A High Mortality of Doves Reviews

Kate Ellis was born and brought up in Liverpool and studied drama in Manchester. She is the author of the Wesley Peterson murder mysteries, as well as the Albert Lincoln trilogy and the Joe Plantagenet mysteries.

Visit her online at: www.kateellis.co.uk

GOR008240115
A High Mortality of Doves by Kate Ellis
Kate Ellis
Albert Lincoln
Used - Very Good
Paperback
Little, Brown Book Group
2017-05-04
368
0349413061
9780349413068
N/A
Book picture is for illustrative purposes only, actual binding, cover or edition may vary.
This is a used book - there is no escaping the fact it has been read by someone else and it will show signs of wear and previous use. Overall we expect it to be in very good condition, but if you are not entirely satisfied please get in touch with us.