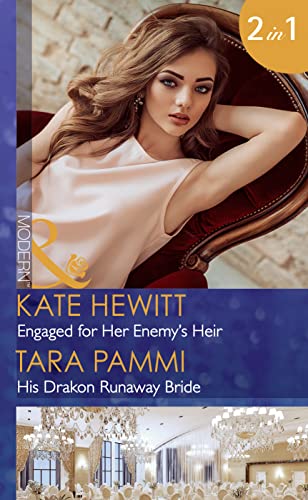 Engaged For Her Enemy's Heir
by Kate Hewitt

Surrendering to the Italian billionaire

Engaged For Her Enemy's Heir Summary

Surrendering to the Italian billionaire

When ruthless Rafael Vitali learns the woman in his bed is the daughter of his sworn enemy, he can't get her out of his penthouse quick enough. But when Allegra reveals she's pregnant, Rafael seizes the opportunity to assert his control. He insists Allegra move to Sicily... as his wife!

Allegra's night of abandon with Rafael shattered the life she once knew. His claim over her body, and their unborn child, is undeniable but giving him a claim over her fragile heart is beyond foolish...yet the temptation he poses is wildly, wickedly irresistible...

When one night...leads to pregnancy!

Ariana Sakis walked out on her husband Crown Prince Andreas Drakos knowing her feelings were unrequited. For ten years she has hidden herself away, determined never to be made vulnerable by passion again and believing herself divorced. Until her new wedding day is interrupted by Andreas himself, declaring them still married!

Furious at her betrayal, Andreas won't let Ariana escape him again. He'll take his revenge by claiming Ariana for his throne-and his bed! But their passionate reunion threatens to undo dark-hearted Andreas, and he soon realises that desire is even more binding than duty...

Kate Hewitt has worked a variety of different jobs, from drama teacher to editorial assistant to church youth worker, but writing romance is the best one yet. She also writes short stories and serials for women's magazines, and all her stories celebrate the healing and redemptive power of love. Kate lives in a tiny village with her husband, five children, and an overly affectionate Golden Retriever. Tara Pammi can't remember a moment when she wasn't lost in a book, especially a romance which, as a teenager, was much more exciting than mathematics textbook. Years later Tara's wild imagination and love for the written word revealed what she really wanted to do: write! She lives in Colorado with the most co-operative man on the planet and two daughters. Tara loves to hear from readers and can be reached at tara.pammi@gmail.com or her website www.tarapammi.com.

GOR008586998
Engaged For Her Enemy's Heir: Engaged for Her Enemy's Heir (One Night With Consequences) / His Drakon Runaway Bride (The Drakon Royals) (Mills & Boon Modern) by Kate Hewitt
Kate Hewitt
Used - Very Good
Paperback
HarperCollins Publishers
2017-08-24
384
0263925374
9780263925371
N/A
Book picture is for illustrative purposes only, actual binding, cover or edition may vary.
This is a used book - there is no escaping the fact it has been read by someone else and it will show signs of wear and previous use. Overall we expect it to be in very good condition, but if you are not entirely satisfied please get in touch with us.