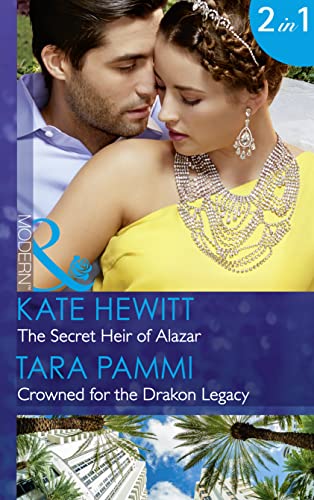 The Secret Heir Of Alazar
by Kate Hewitt

Virginal Gracie Jones longs for adventure-and one incredible evening in Rome, she finds it in the arms of charismatic Malik al Bahjat. But morning reveals he's next in line to Alazar's throne! Driven away by his royal family, Gracie discovers too late that their forbidden night left her pregnant...

The Secret Heir Of Alazar Summary

Virginal Gracie Jones longs for adventure-and one incredible evening in Rome, she finds it in the arms of charismatic Malik al Bahjat. But morning reveals he's next in line to Alazar's throne! Driven away by his royal family, Gracie discovers too late that their forbidden night left her pregnant...

When Malik learns the truth a decade later, he explodes back into Gracie's life. He sweeps her from her small hometown to his splendid kingdom where, kiss by scorching kiss, he's intent on legitimising his heir-and satisfying his cravings-by crowning Gracie his desert queen!

He may have craved her for a decade, but one exquisite night with Mia Rodriguez is all Nikandros Drakos, the Daredevil Prince of Drakon, will allow himself. It's time to face his home country and the duty he's denied for so long.

But when their sizzling liaison leads to an unexpected pregnancy, Nik won't rest until his child is part of the Drakon legacy. Their affair was supposed to burn up along with their chemistry but now, to claim his heir, Nik must make unruly Mia both his bride - and his princess!

Kate Hewitt has worked a variety of different jobs, from drama teacher to editorial assistant to church youth worker, but writing romance is the best one yet. She also writes short stories and serials for women's magazines, and all her stories celebrate the healing and redemptive power of love. Kate lives in a tiny village with her husband, five children, and an overly affectionate Golden Retriever. Tara Pammi can't remember a moment when she wasn't lost in a book, especially a romance which, as a teenager, was much more exciting than mathematics textbook. Years later Tara's wild imagination and love for the written word revealed what she really wanted to do: write! She lives in Colorado with the most co-operative man on the planet and two daughters. Tara loves to hear from readers and can be reached at tara.pammi@gmail.com or her website www.tarapammi.com.

GOR008237423
The Secret Heir Of Alazar: The Secret Heir of Alazar (Seduced by a Sheikh) / Crowned for the Drakon Legacy (The Drakon Royals) (Mills & Boon Modern) by Kate Hewitt
Kate Hewitt
Used - Very Good
Paperback
HarperCollins Publishers
2017-03-23
384
026392517X
9780263925173
N/A
Book picture is for illustrative purposes only, actual binding, cover or edition may vary.
This is a used book - there is no escaping the fact it has been read by someone else and it will show signs of wear and previous use. Overall we expect it to be in very good condition, but if you are not entirely satisfied please get in touch with us.