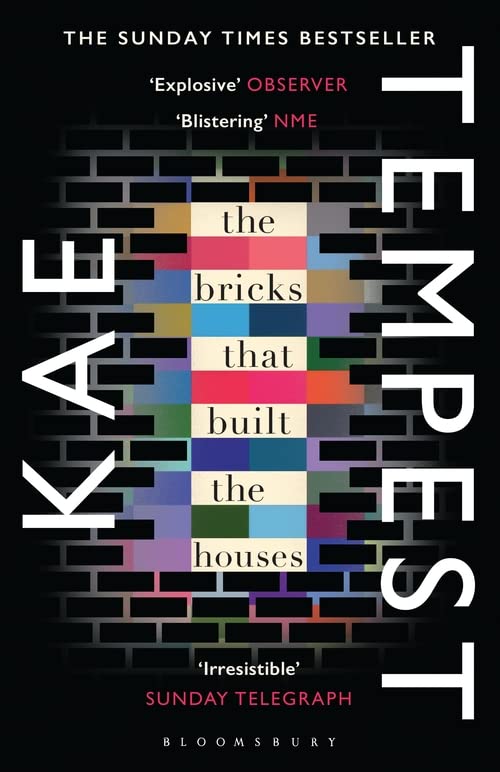 The Bricks that Built the Houses
by Kate Tempest

The Bricks that Built the Houses Summary

The Bricks that Built the Houses: The Sunday Times Bestseller by Kate Tempest

THE SUNDAY TIMES BESTSELLER WINNER OF THE BOOKS ARE MY BAG BREAKTHROUGH AUTHOR AWARD Kate Tempest's critically acclaimed debut novel, the literary companion to her Mercury-Prize nominated album Everybody Down, takes us into the beating heart of the capital in this multi-generational tale of drugs, desire and belonging Young Londoners Becky, Harry and Leon are leaving town in a fourth-hand Ford Cortina with a suitcase full of money. They are running from jealous boyfriends, dead-end jobs, violent maniacs and disgruntled drug dealers, in the hope of escaping the restless tedium of life in south-east London - the place they have always called home. *This book has been printed with two different cover designs. We are unable to accept requests for a specific cover. The different covers will be assigned to orders at random*

Customer Reviews - The Bricks that Built the Houses

The Bricks that Built the Houses Reviews

Wonderful * Lauren Laverne *
Soaring ... Tempest's flair for language is tempered by her sense of rhythm and pace ... Deeply affecting: cinematic in scope; touching in its empathic humanity ... Tempest's voice - by turns raging and tender - never falters * New York Times *
This is a bold, bright, beguiling novel; a lustrous pageant that dazzles and grips ... An irresistible, immersive snapshot of a changing world, delivered in woozy, staccato sentences ... There's great pleasure to be taken from Tempest's debut ... She may well be unstoppable * Sunday Telegraph *
One of the leading wordsmiths of our time ... She turns her raw, observational skills in book form to the urban young growing up poor - sex, drugs and increasing poverty amid the looming threat of gentrification * Jon Snow *
It's hard not to be blown away by Kate Tempest ... A stirring, post-Dickensian lens trained on London's lonely underbelly * Evening Standard *
This book is almost everything I hoped it would be. That is praise indeed, as I had high hopes ... As lyrical as it is gritty, and as devoted to (south-east) London as it is to humanity, with all its foibles * New Statesman *
Tempest has a knack for the devastating throwaway line - a skill-honed, no doubt, from years of rapping and spoken-word performances. Her work is rich with underlinable lines ... Captivating * New Yorker *
Everything Kate tempest does comes from the same gnawing desire to tell stories and change the world ... The book covers come-ups, comedowns, gender identity, parents torn apart by activism and the brutal, beautiful face of survival against the odds ... Blistering **** * NME *
Explosive ... Fresh and vivid visions of a familiar world ... It recalls two other great, recent, experimental novels about being young: Jon McGregor's If Nobody Speaks of Remarkable Things and Eimear McBride's A Girl Is a Half-Formed Thing. There's the same sense of daring and linguistic inventiveness, the same feeling of language pushed to its limits ... It fairly flies off the page * Observer *
A story of accidental adventure and loss in what feels like London's boiling crucible of race, class and sexuality ... This novel requires giving oneself over to its linguistic world ... It seems not just to describe a contemporary world but chart the migratory and class movements that has led it to its current state * Andrew McMillan, Independent *
Angst-ridden lyricism captures the energy and loneliness of London life in this dizzying, genre-busting debut ... A remarkable piece of writing, filled with verbal echoes and half-rhymes ... [One reads] for the pinpoint evocation of a milieu, its texture and contours, all delivered with an intensely gathered and focused energy ... Transformative * Guardian *
The passion, pace and pulsing narrative of her novel is like an extended Arctic Monkeys track ... London emerges as the beating heart, a melting pot of race, class, sexuality and drugs. Tempest is a clearly talented writer with a distinctive and engaging voice ... Passionate and political * Irish Times *
Tempest is a worthy champion for a generation of disillusioned youth ... Her lyrical talent comes through * Sunday Times *
Tempest's words really soar from the grime of London ... Smart, lyrical observations of city life won me over ... Tempest proves her witty, unique take on the world **** * Stylist *
Tempest is brilliant at capturing a distinctly contemporary state of mind, one hollowed out by drugs, ennui and too many late nights, but also one bursting with frustrated feeling and desire. She has a poetic sensibility that feels physically hewn from London's unloved corners ... Her writing has a startling, unmediated freshness reminiscent of Jack Kerouac ... Full of beauty * Metro *
Her characters sing ... This is yet another impressive achievement for Tempest, and one which leaves this Generation Xer understanding the woes of millennials much better * Scotland on Sunday *
A novel of discontentment, rage and good intentions ... Tempest sharpens her tongue to good effect * The Times *
A startling debut novel ... The call-to-arms urgency with which she writes about the issues affecting her generation - from social prejudice and unemployment to modern love and selfies - has earned her comparisons to the Beat poets * Vogue *
A whirlwind journey through modern city life ... You'll be gripped from start to finish * Elle *
There's plenty of inspiration and perspiration in the literary world, but Kate Tempest's sense of urgency is rare ... Tempest does come across as an enemy of beige prose ... She depicts their interior worlds as roiling; the intensity of their inner lives explodes on the page * National Post *
Tempest portrays the lives of generations of Londoners with an unflinching but sympathetic eye * Big Issue *
A lager-stained, rain-soaked love letter to London ... Flows like a prose poem about drugs, dual carriageways and desire * Red *
A novel about youth and drugs and desire and dancers ... It's also about the changing face of the capital city. About gentrification and its costs * Herald *
Tempest has a gift for making you feel you're walking on the edge of something: between text and sound, or between a great night and the worst one ... Many bursts of lyrical prose, heavy and kaleidoscopic * Saturday Paper *
Tempest gets at foundations: If families are houses, then each family member is a cracked brick ... This might be Tempest's first novel, but it's also poetry ... By artfully intertwining the stories of people who are broken by the city they love, The Bricks That Built the Houses creates a complex narrative that rarely falters and eventually coheres into a strong and lyrical whole * The Millions *

Kate Tempest is an award-winning musician, poet, novelist and playwright. Her epic poem, Brand New Ancients, won the Ted Hughes Prize for poetry in 2013. In 2014 she was named by the Poetry Society as a Next Generation Poet and her debut solo album, Everybody Down, was nominated for the Mercury Music Prize. In 2016, The Bricks that Built the Houses, her debut novel and the literary companion to Everybody Down, went straight into the Sunday Times bestseller list on hardback publication. The same year Kate Tempest was a judge of the Mercury Prize and in October 2016, her new album, Let Them Eat Chaos, was released to rave reviews. The accompanying long form poem was shortlisted for the Costa Poetry Award 2016. katetempest.co.uk @katetempest

GOR008253657
The Bricks that Built the Houses: The Sunday Times Bestseller by Kate Tempest
Kate Tempest
Used - Very Good
Paperback
Bloomsbury Publishing PLC
2017-03-09
416
1408857332
9781408857335
N/A
Book picture is for illustrative purposes only, actual binding, cover or edition may vary.
The book has been read, but looks new. The book cover has no visible wear, and the dust jacket is included if applicable. No missing or damaged pages, no tears, possible very minimal creasing, no underlining or highlighting of text, and no writing in the margins.