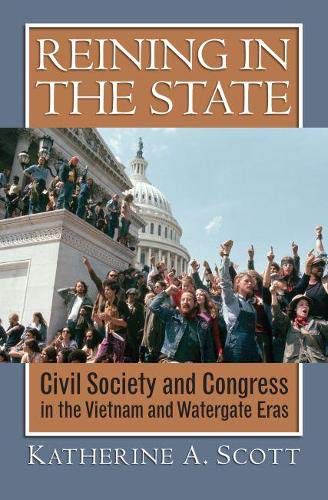 Reining in the State
by Katherine A. Scott

In Stock
£27.99
Examines the 1970s citizens' movement to rein in the state--to restrain domestic surveillance, protect individual rights, and ensure greater transparency and accountability from the federal government.
Like New
Only 1 left

Reining in the State Summary

Reining in the State: Civil Society and Congress in the Vietnam and Watergate Eras by Katherine A. Scott

Katherine Scott chronicles the subsequent public response to that government action: a determined citizens' movement to rein in the state. She details the efforts of a group of unheralded heroes who battled to reinvigorate judicial, legislative, and civic oversight of the executive branch in order to curtail and prevent future abuses by government agencies. Working closely with allies in Congress, they challenged state power, instituted open government policies, and protected individual privacy rights.

Scott has assembled a cast of characters with compelling stories: Russ Wiggins of the Washington Post, who organised a citizens' campaign for government transparency; Representative John Moss, who called attention to government censorship; ACLU Director Aryeh Neier, who created a legal strategy for judicial oversight of executive branch security measures; Senator Sam Ervin, a civil libertarian who demanded greater oversight of the executive branch; and Morton Halperin, a former NSC staff member, who called attention to the gross constitutional violations of the nation's top security agencies. Rejecting the agendas and methods of both the radical left and the antigovernment right, these progressive reformers sought to bring the American state in line with democratic practice.

When Army Captain Christopher Pyle blew the whistle on the U.S. Army's domestic surveillance program, reformers had evidence of illegal domestic spying that they had long suspected but could not confirm. Scott explores how his action united liberals and conservatives to end such abuses. She also assesses how Watergate prompted broad debate in the public sphere about the problems of executive power, the need for greater transparency in domestic security policy, and greater oversight of the activities of the FBI and CIA.

These reformers' efforts bore fruit with the passage of a series of major legislative reforms, including the 1974 Freedom of Information Act revisions, the 1974 Privacy Act, the 1976 Government in Sunshine Act, and the 1978 Foreign Intelligence Surveillance Act. Now that government surveillance of citizens has returned to public consciousness in the wake of 9/11, Scott's stirring account reminds us that power still resides with the people.

Reining in the State Reviews

"Part of the value of Katherine Scott's informative book lies in its demonstration of the difficulty of untangling the complexities of post-World War II national security intelligence gathering and the legitimacy of Americans' recent privacy concerns."--The Historian

"This is a much-needed analysis of civil-political relations, providing an excellent framework for citizen activism against an overly exuberant executive and an overly placative Congress."--Choice

"A powerful study that explains why the American political system requires the dedication and energy of citizen activists, editors, journalists, and private organizations to push back against secrecy and executive violations."--Louis Fisher, author of The Constitution and 9/11: Recurring Threats to America's Freedoms

"This well-written book helps fill a large gap in our knowledge about attempts to reform U.S. national security policy through greater transparency and accountability for the nation's secret agencies."--Loch K. Johnson, author of America's Secret Power: The CIA in a Democratic Society

About Katherine A. Scott

Katherine A. Scott is Assistant Historian with the U.S. Senate.

GOR009946881
Reining in the State: Civil Society and Congress in the Vietnam and Watergate Eras by Katherine A. Scott
Katherine A. Scott
Used - Like New
Hardback
University Press of Kansas
2013-03-01
248
070061897X
9780700618972
N/A
Book picture is for illustrative purposes only, actual binding, cover or edition may vary.
The book has been read, but looks new. The book cover has no visible wear, and the dust jacket is included if applicable. No missing or damaged pages, no tears, possible very minimal creasing, no underlining or highlighting of text, and no writing in the margins.