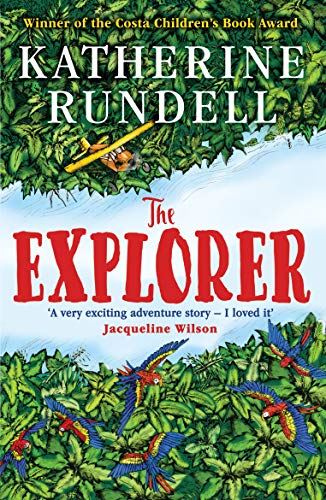 The Explorer
by Katherine Rundell

The Explorer by Katherine Rundell

Go on an adventure with Katherine Rundell ... Winner of the Children's Book Prize Winner of the Costa Children's Book Award 2017 Winner of the London Book Fair Children's Travel Book of the Year 'I loved The Explorer' Jacqueline Wilson 'Rundell is now unarguably in the FIRST RANK' Philip Pullman 'Read everything she writes' Daily Mail From his seat in the tiny aeroplane, Fred watches as the mysteries of the Amazon jungle pass by below him. He has always dreamed of becoming an explorer, of making history and of reading his name amongst the lists of great discoveries. If only he could land and look about him. As the plane crashes into the canopy, Fred is suddenly left without a choice. He and the three other children may be alive, but the jungle is a vast, untamed place. With no hope of rescue, the chance of getting home feels impossibly small. Except, it seems, someone has been there before them ...

A wildly exciting adventure ... One of our most talented writers for children * Observer, Children's Book of the Week *
The tone is humorous and wise, the characterisation observant and true, and the story suspenseful ... Reading this delicious book is like eating electricity * Sunday Times, Children's Book of the Year *
Cracking ... A kind of cross between Indiana Jones and the film Up ... One of the most captivating books of the year * Spectator *
Katherine Rundell just gets better and better. I loved The Explorer. On one level it's a very exciting adventure story of four children fighting for survival in the Amazon - but it's also saying profound things about human nature and love and loss * Jacqueline Wilson *
There's a gritty solidity to the horrors and the beauties, and a completely convincing depth to the characters, all of whom I loved. Katherine Rundell is now unarguably in the FIRST RANK * Philip Pullman *
An adventure story to die for ... Rundell is a class act - her beautiful descriptions of the rainforest could turn the head of a Mayan statue. And scrap bedtime: her need-to-know next chapters just won't wait till the sun's up. What a discovery * The Times *
As extravagantly beautiful as the rainforest it so lovingly describes, I cannot imagine the child who wouldn't be delighted by it * Independent *
Plunge into the green wilds of Katherine Rundell's marvellous new novel ... Hannah Horn's delicate line drawings, encroach, vine-like, on Rundell's dangerous, intoxicating pages in this love song to the natural world. It is essential reading for lovers of Eva Ibbotson * Guardian *
'For sheer adventure, The Explorer is hard to trump * Daily Telegraph *
Rundell conjures up a world of natural beauty - pre-internet - where survival depends on cooperation. Her vivid locations are almost characters in themselves ... Terrific * Daily Mail *
Rundell is an astonishing young talent and her books combine old-fashioned, edge-of-your-seat adventure with richly imagined characters... Read everything she writes * Daily Mail *

Katherine Rundell is the bestselling author of five children's novels and has won the Costa Children's Book Award, the Blue Peter Book Award and the Waterstones Children's Book Prize amongst many others. Katherine spent her childhood in Africa and Europe before taking her degree at the University of Oxford and becoming a Fellow of All Souls College. As well as writing, she studies Renaissance literature and occasionally goes climbing on the rooftops late at night. Hannah Horn is a UK-based artist who specialises in illustration, paint and printmaking. Born in Aberdeen, Hannah studied fashion illustration at the London College of Fashion. In her career thus far she has produced work for a diverse range of projects including fashion, print, skateboarding brands and album artwork. The Explorer is her first children's fiction illustration project.

GOR008849584
The Explorer by Katherine Rundell
Katherine Rundell
Used - Very Good
Paperback
Bloomsbury Publishing PLC
2018-01-02
416
1408882191
9781408882191
N/A
Book picture is for illustrative purposes only, actual binding, cover or edition may vary.
This is a used book - there is no escaping the fact it has been read by someone else and it will show signs of wear and previous use. Overall we expect it to be in very good condition, but if you are not entirely satisfied please get in touch with us.