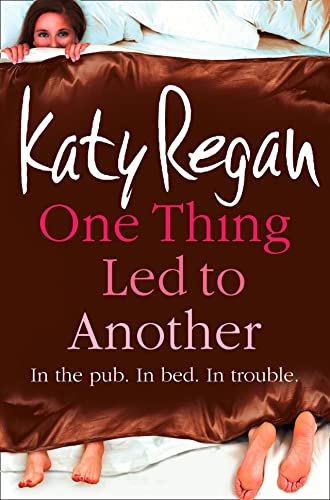 One Thing Led to Another
by Katy Regan

A smart, punchy, poignant and achingly funny debut based on Katy Regan's hugely popular Marie Claire column And then there were three...sort of

One Thing Led to Another Summary

One Thing Led to Another by Katy Regan

A smart, punchy, poignant and achingly funny debut based on Katy Regan's hugely popular Marie Claire column And then there were three...sort of

Tess Jarvis' rules for life have always been somewhat
relaxed...

1.Never go to bed before your last guest has left
Tess and Gina's flat has a jacuzzi so it's the obvious location for a party ... every night

2.Make great friends and keep them close
Thought not actually in your bed.Tess and Jim's claims that they are `just good friends' has everyone's eyes rolling.

3.Look on the bright side of life
After all it could be so much worse.Tess's job interviewing the nation's catastrophes proves this every day.

4.Don't wait for the weekend to wear your fancy knickers
Although be warned, this can lead to all manner of messes...
Tess has always been one to wing it but she's fast realizing that her bank of blag is running out of funds. At 28, is it time to grow up? Maybe having a baby with your best friend isn't the best way to start...

One Thing Led to Another Reviews

* 'Katy's brilliant at unravelling the bewildering, emotionally complicated reality of the situation, with laugh-out-loud humour and the kind of bitter-sweet sadness that made me wish I wearing tear proof mascara, and hope for the happiest of endings for Tess. Totally fab.' Eithne Farry, Marie Claire

* 'An entertaining, engaging and effortless read full of warmth and humour' Rowan Coleman

* `Told with poignant frankness, it's packed with heartbreak, romance and laughs.' Grazia

* `A witty debut with plenty of LOL moments'Heat

Katy Regan worked at 19 magazine for two years before joining Marie Claire in 2002. 'Highlights' in that position included spending ten days in the buff on a nudist resort and becoming a footballer's wife for a week - all in the name of investigative journalism.

In 2004 at the height of her career as the office roving reporter singleton, she fell accidentally pregnant by her best mate (who just remained a friend). Seeing the creative possibilities in this unconventional situation, her editor commissioned her to write a column - And then there were three... which proved so successful it ran for two years and inspired many a reader to write in to Katy with their life story. She has now taken her loyal following to her blog:The State She's In on the Marie Claire website.

Katy shares care of her son Fergus with his dad who lives across the road.

GOR000931326
One Thing Led to Another by Katy Regan
Katy Regan
Used - Very Good
Paperback
HarperCollins Publishers
2009-02-19
368
0007277377
9780007277377
N/A
Book picture is for illustrative purposes only, actual binding, cover or edition may vary.
This is a used book - there is no escaping the fact it has been read by someone else and it will show signs of wear and previous use. Overall we expect it to be in very good condition, but if you are not entirely satisfied please get in touch with us.