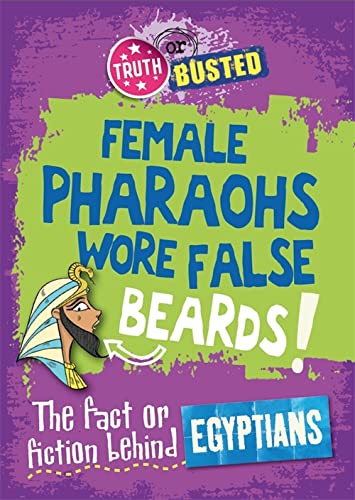 Truth or Busted: The Fact or Fiction Behind the Egyptians
by Kay Barnham

In Stock
£7.99
Is everything you hear about the Egyptians true? This book will teach you how not to be a sucker when it comes to facts about ancient Egypt!
Very Good
Only 4 left

Truth or Busted: The Fact or Fiction Behind the Egyptians Summary

Truth or Busted: The Fact or Fiction Behind the Egyptians by Kay Barnham

True or false?
Pharoahs never let their hair down
Cleopatra died from a snake-bite
Ancient Egyptians snacked on hedgehogs
Mummies were used as medicine!

Explore the myths and legends surrounding the fascinating world of ancient Egypt. Dig deep to uncover the fact or fiction behind mummification, pyramid-building and hieroglyphics, as well as fascinating pharaohs and exotic empresses!

The Truth or Busted series explores the fact or fiction behind stuff you THINK you know in a tongue-in-cheek, humorous way that kids will find unputdownable!

Kay Barnham was born in Barrow-in-Furness, grew up in Carlisle, went to college in Brighton, and lived in Hove for a while, before sailing for Kinsale, Co Cork, popping back to Hove and then moving to the New Forest with her husband and daughter. And never at any point has she lived more than ten miles from the sea. She began working in children's publishing in 1992. She was an editor first of all, working on illustrated non-fiction and learning fun facts like how long it would take to walk to the moon - nine years - and how to spell palaeontology. Next, she commissioned fiction titles, editing picture books, storybooks and novels. And then she got the chance to write her own books, which she thinks is quite the best job ever. Except possibly being a chocolatier. She writes non-fiction as Kay Barnham. Her specialist subjects include ice-skating, Isambard Kingdom Brunel, lightning, fairies, Roald Dahl, Sir Isaac Newton, Christmas, dolphins, Florence Nightingale and very bad cracker jokes. And chocolate.She also writes fiction as Kay Woodward, including the Skate School series for Usborne and the novels Jane Airhead and Wuthering Hearts for Andersen Press. Altogether, she's written about a hundred books. Her favourite colour is navy blue. Her favourite chocolate is 85% cocoa solids.

GOR008561595
Truth or Busted: The Fact or Fiction Behind the Egyptians by Kay Barnham
Kay Barnham
Truth or Busted
Used - Very Good
Paperback
Hachette Children's Group
2016-06-14
96
0750297417
9780750297417
N/A
Book picture is for illustrative purposes only, actual binding, cover or edition may vary.
This is a used book - there is no escaping the fact it has been read by someone else and it will show signs of wear and previous use. Overall we expect it to be in very good condition, but if you are not entirely satisfied please get in touch with us.