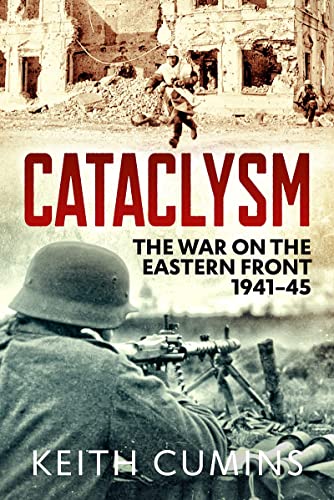 In Stock
£19.99
Comprehensive overview of the war on the Eastern Front from the commencement of Operation Barbarossa in 1941 to the last battle in Berlin in 1945.
New£19.99
5 in stock

Cataclysm: The War on the Eastern Front, 1941-45 by Keith Cumins

The significance of the Second World War and its relevance to the lives of so many, has generated a legacy of published material on the topic sufficient to fill a library quite a few times over. Yet disproportionately few publications deal exclusively with the true cauldron of the conflict - the brutal and uncompromising war between Germany and the Soviet Union; and fewer still attempt to provide, in a single volume, a comprehensive overview of that war from the commencement of Operation Barbarossa to the last battle in the rubble-strewn streets of Berlin. Drawing on information from Soviet archives that has only become available since the collapse of the Soviet Union, Cataclysm: The War on the Eastern Front 1941-1945, is unquestionably the most successful attempt so far to achieve that goal. As Winston Churchill acknowledged, the Red Army tore the guts out of the Wehrmacht, and the story of how that happened, a story in which the events at Stalingrad were just one part, deserves to be told with greater frequency and to be understood more widely. From the enormous amount of detailed information currently available on the military struggle on the Eastern Front, condensing the events of a war of such scale and duration into a succinct narrative in a meaningful and balanced way has long been a challenging task. Yet the mortal conflict between Hitler's Germany and Stalin's Russia is deserving of the effort. Cataclysm focuses on the ground fighting along the Eastern Front, for it was overwhelmingly the ground war that determined the outcome of the conflict. With the aid of concise supporting maps, the book provides a clear and comprehensive account of the ebb and flow of a four-year long conflict conducted across a thousand miles of frontline in the vast region between the Elbe and Volga. For anyone wishing to understand the war in on the Eastern Front, Cataclysm is essential reading.

"Cumins' book is a notable success. While not adding new information to the Barbarossa story he succeeds admirably in condensing the complexity of the operation into a manageable and useful narrative at both the strategic and operational levels of engagement. For the aspiring historian and casual military enthusiast, this is a highly recommended book as a starting point from which to branch into more detailed accounts; made more so by the fact that it is presented in a lucid and engaging style."--RCAF Journal
"Cumins has expertly guided us through the fighting. The author as well as the publisher, Helion & Company, are to be congratulated on publishing this title, which does much to enhance our knowledge of the fighting on the all-decisive theatre of the Second World War: the Eastern Front.".--Journal of Slavic Military Studies
"...it goes into great detail about individual battles, looking at all the different formations, companies, battalions, etc that made up each army."-- (06/01/2019)

Keith Cumins was born in 1950, in the Rossendale Valley in Lancashire, England. As a chemistry graduate from the University of Manchester Institute of Science and Technology, he spent most of his career working as a scientist, and latterly a manager, in the UK's water industry. During this time he wrote a number of short stories and a novel. He has also edited translated Russian memoirs and his father's semi-autobiographical novel, which was set in the period 1925 to 1944. After retiring in 2002, Keith was able to develop his life-long interest in the history of the first half of the twentieth century. A dedication to studying military history culminated in the completion of this major new single-volume account of the land battles of the Soviet-German conflict of 1941 to 1945. Keith lives with his wife of 37 years in East Kilbride in Scotland, and has a son who is also a writer.