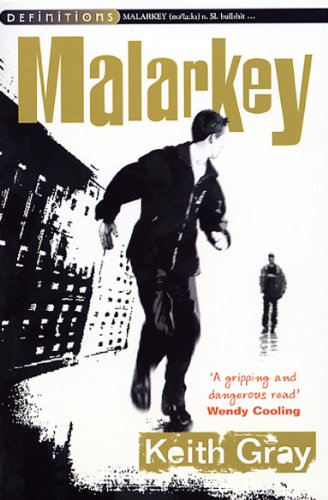 In Stock
£3.99
Brook High is a great grey concrete ants' nest of a school. The more questions he asks the deeper he becomes involved in the corrupt under-belly of the school. He discovers that the name of the organisation's leader is Freddie Cloth, and Mary Chase turns out to be Cloth's girlfriend.
Very Good
Only 3 left

Brook High is a great grey concrete ants' nest of a school. John Malarkey is the new kid, thrown in at the deep end of Year 11. He's the wrong person in the wrong place at the wrong time. Through what at first appears to be a random meeting, he helps a girl called Mary Chase out of a tricky situation, but is subsequently accused of stealing report cards to sell to students so they can write their own bogus reports. He quickly realises it was all a set-up, and that he's been used to take the fall. The teacher who accuses him of the crime gives him one day to prove his innocence. Malarkey tries to track down Mary Chase, but it's difficult in such a huge place. He does, however, discover strange goings-on beneath the surface of the normal school day. The more questions he asks the deeper he becomes involved in the corrupt under-belly of the school. He's also noticed the peculiar fact that so many kids at Brook wear Adidas trainers - black with the three white stripes. He realises that these are the badge of membership worn by those involved in the school's 'mafia'. He discovers that the name of the organisation's leader is Freddie Cloth, and Mary Chase turns out to be Cloth's girlfriend. Malarkey is soon noticed for asking so many questions, and receives warnings and then threats to back down. But, with time quickly running out for him, he still has to prove his innocence. And the only way to do this is to get to Freddie Cloth.

"A tense thriller founded on conveying psychology, Malarkey is a compelling British version of Robert Cormier's US classic, The Chocolate War" -- Julia Eccleshare * Guardian *
"Ingenious and exciting" -- Kit Spring * Observer *
"Clever, cool, suspenseful" -- Nicolette Jones * The Sunday Times *
"A gripping and dangerous read that stays in the mind for its chilling reality, the power of the story and the quality of the writing" -- Wendy Cooling * The Bookseller *
"Don't miss this! It's Keith Gray's best novel to date. Opening with a breathless bag chase, it doesn't let up the momentum for a second" -- Michael Thorn * Achuka *

Keith was born and brought up in Grimsby and knew from an early age that he wanted to be a writer. When he received 0% for his accountancy exams he decided to pursue his dream. Since then, he has gone on to win the Angus Book Award and the silver medal in the Smarties Prize. He has twice been shortlisted for the Guardian Fiction Prize and was shortlisted for the Booktrust Teen Prize and the Scottish Arts Council Book Award. Rave reviews about his writing have appeared in every broadsheet. Keith was a judge for the Blue Peter Book Award, the Guardian Fiction Prize and the Bookstrust Teen Prize and reviews regularly for the Guardian. Keith is now a full-time writer living in Edinburgh.

GOR000979939
Malarkey by Keith Gray
Keith Gray
Used - Very Good
Paperback
Random House Children's Publishers UK
2003-06-05
208
0099439441
9780099439448
Short-listed for Booktrust Teenage Prize 2003
Book picture is for illustrative purposes only, actual binding, cover or edition may vary.
This is a used book - there is no escaping the fact it has been read by someone else and it will show signs of wear and previous use. Overall we expect it to be in very good condition, but if you are not entirely satisfied please get in touch with us.