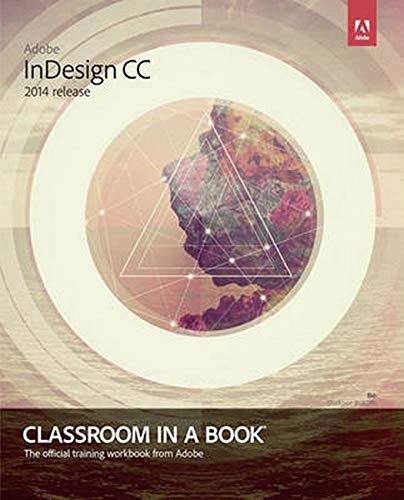 Classroom in a Book (R), the best-selling series of hands-on software training workbooks, offers what no other book or training program does-an official training series from Adobe Systems Incorporated, developed with the support of Adobe product experts.

Adobe InDesign CC Classroom in a Book contains 16 lessons that cover the basics, providing countless tips and techniques to help you become more productive with the program. You can follow the book from start to finish or choose only those lessons that interest you.

In addition to learning the key elements of the InDesign interface, this completely revised CC (2014 release) edition covers new features, including rows and columns in tables, dual PDF and IDML file packaging, fixed and reflow EPUBs, and major improvements in the way text and graphics are handled during EPUB export.

Purchasing this book gives you access to the downloadable lesson files you need to work through the projects in the book, and to electronic book updates covering new features that Adobe releases for Creative Cloud customers. For access, goto www.peachpit.com/redeem and redeem the unique code provided inside this book.

"The Classroom in a Book series is by far the best training material on the market. Everything you need to master the software is included: clear explanations of each lesson, step-by-step instructions, and the project files for the students."

Kelly Kordes Anton has written and edited dozens of books and training resources on InDesign, including four previous editions of the Adobe InDesign Classroom in a Book. She also writes articles on such diverse topics as youth hockey, service dog training, and financial education. Kelly lives in Littleton, Colorado.

John Cruise has been writing about and using page layout software for more than two decades. He's coauthored numerous books, including the InDesign Bible, Adobe InDesign HOW TOs: 100 Essential Techniques, and several editions of the Adobe InDesign Classroom in a Book. He's written articles for numerous publications, including Macworld, MacAddict, MacLife, and Layers magazines. John is also a page layout and design instructor at Metropolitan State University of Denver.

2 Getting to Know InDesign

3 Setting Up a Document and Working with Pages

15 Creating and Exporting an ebook

GOR008263355
Adobe InDesign CC Classroom in a Book (2014 release) by Kelly Kordes Anton
Kelly Kordes Anton
Used - Very Good
Hardback
Pearson Education (US)
2014-07-16
432
0133904393
9780133904390
N/A
Book picture is for illustrative purposes only, actual binding, cover or edition may vary.
This is a used book - there is no escaping the fact it has been read by someone else and it will show signs of wear and previous use. Overall we expect it to be in very good condition, but if you are not entirely satisfied please get in touch with us.