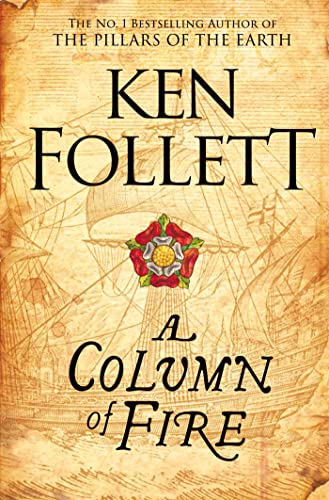 A Column of Fire
by Ken Follett

Used Price
£2.99
New RRP £9.99
Free Shipping in the UK
Ken Follett's captivating third novel in the Kingsbridge series, A Column of Fire, returns to the setting and story that began, and continued, in the multi-million copy bestsellers The Pillars of the Earth and World Without End. Christmas 1558, and the world is in turmoil as a new queen takes her throne and one man pledges to protect her life at all costs.
Very Good Good Well Read

A Column of Fire Summary

A Column of Fire by Ken Follett

Millions of readers have been enthralled by the saga that began in The Pillars of the Earth and World Without End, which now continues with Ken Follett's magnificent, gripping A Column of Fire.

A WORLD IN TURMOIL

1558, and Europe is in revolt as religious hatred sweeps the continent. Elizabeth Tudor has ascended to the throne but she is not safe in this dangerous new world. There are many who would see her removed, not least Mary Queens of Scots, who lies in wait in Paris.

Elizabeth determines to set up a new secret service: a group of resourceful spies and courageous agents entrusted to keep her safe and in power. As she searches for those who will make the difference, one man stands out.

A MAN WHO WOULD DIE FOR HIS QUEEN

For Ned Willard the opportunity to serve his queen is God-sent. He cannot stay in Kingsbridge and watch the love of his life marry another, and as fires burn and extremism begins to spark throughout Europe, Ned makes his choice. He will spend his life protecting his monarch from the tyrants who aim to destroy her or die trying . . .

A Column of Fire Reviews

Follett's storytelling skills make their adventures riveting * The Times *
Deploying a substantial cast of characters, Follett unrolls a familiar history of religious and political ferment and turns it into accessible and enjoyable fiction * Daily Mail *
This triumphant saga, begun almost 30 years ago with The Pillars Of The Earth, moves across England to Scotland, France and the New World * Sunday Express *
A sumptuous slice of swashbuckling Elizabethan romance * Mail on Sunday *
The characters, both fictional and real, are fascinating, and the Tudor period setting holds its own special allure. This is a novel that fans of historical fiction will savour and cherish * National *
A huge read, perfect for long winter nights * Choice *
A thundering ride through history * Peterborough Evening Telegraph *
Follett has once more lit the touch paper of English history and allowed it to explode across the pages in in all its vivid technicolour * Lancashire Evening Post *

Ken Follett was twenty-seven when he wrote Eye of the Needle, an award-winning thriller that became an international bestseller. He then surprised everyone with The Pillars of the Earth, about the building of a cathedral in the Middle Ages, which continues to captivate millions of readers all over the world, and its long-awaited sequel, World Without End, was a number one bestseller in the US, UK and Europe. He has written the bestselling Century trilogy, which comprises Fall of Giants, Winter of the World and Edge of Eternity. This is the third novel in the Kingsbridge series.

GOR009278536
A Column of Fire by Ken Follett
Ken Follett
The Kingsbridge Novels
Used - Very Good
Paperback
Pan Macmillan
2018-08-23
912
1447278755
9781447278757
N/A
Book picture is for illustrative purposes only, actual binding, cover or edition may vary.
This is a used book - there is no escaping the fact it has been read by someone else and it will show signs of wear and previous use. Overall we expect it to be in very good condition, but if you are not entirely satisfied please get in touch with us.