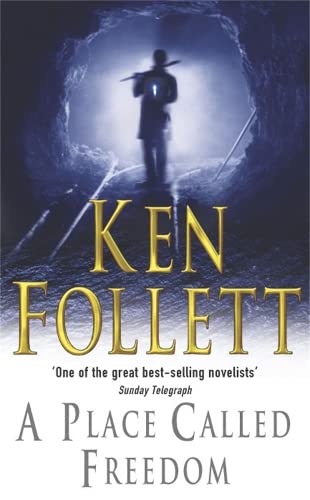 In a brutal world, charismatic rebel miner Mack McAsh - a slave by birth - is a man with the courage to stand up for what is right, and the strength to stick by his beliefs. Independent, rebellious Lizzie Hallim, meanwhile, is engaged to Jay Jamisson, the ruthless landlord's son and heir to an exploitative business empire.

Born into separate worlds, Mack and Lizzie are thrown together when Mack becomes an enemy of the state and is forced to flee his homeland. Lizzie aids his escape, and it is not long before passions rage in the old world as well as the new . . .

Set in an era of turbulent social changes, A Place Called Freedom is a magnificent novel from the undisputed master of suspense and drama, Ken Follett.

Ken Follett was only twenty-seven when he wrote the award-winning novel Eye of the Needle which became an international bestseller. He has since written several equally successful novels, including, most recently, HORNET FLIGHT. He is also author of the non-fiction bestseller On Wings of Eagles.

GOR000671938
A Place Called Freedom by Ken Follett
Ken Follett
Used - Very Good
Paperback
Pan Macmillan
1996-08-09
576
0330344838
9780330344838
N/A
Book picture is for illustrative purposes only, actual binding, cover or edition may vary.
This is a used book - there is no escaping the fact it has been read by someone else and it will show signs of wear and previous use. Overall we expect it to be in very good condition, but if you are not entirely satisfied please get in touch with us.