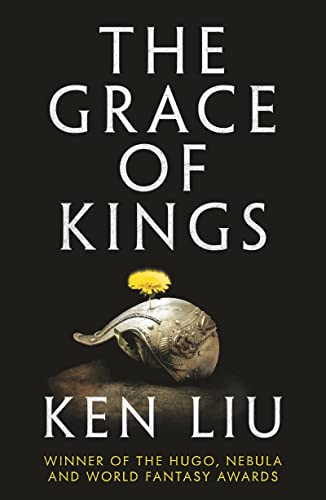 The Grace of Kings
by Ken Liu

A wily, charismatic bandit, and the vengeance-sworn son of a deposed duke cross paths as they each lead their own rebellion against the Emperor's brutal regime. Their unlikely friendship will drastically change the balance of power in Dara... but at what price?

The Grace of Kings Summary

The Grace of Kings by Ken Liu

Emperor Mapidere was the first to unite the island kingdoms of Dara under a single banner. But now the emperor is on his deathbed, his people are exhausted by his vast, conscriptive engineering projects and his counsellors conspire only for their own gain.

Even the gods themselves are restless.

A wily, charismatic bandit and the vengeance-sworn son of a deposed duke cross paths as they each lead their own rebellion against the emperor's brutal regime. Together, they will journey to the heart of the empire; witnessing the clash of armies, fleets of silk-draped airships, magical books and shapeshifting gods. Their unlikely friendship will drastically change the balance of power in Dara... but at what price?

THE GRACE OF KINGS is the debut novel by Hugo-, Nebula- and World Fantasy Award-winner Ken Liu and the first in an monumental new epic fantasy series.

Customer Reviews - The Grace of Kings

The Grace of Kings Reviews

'Epic fantasy fans will enjoy this large-scale story of political strategy and skullduggery' Publishers Weekly.
'An instant classic. This is a debut novel to be reckoned with. Poetry on every page' Hugh Howey.
'By turns opulent, gritty, and inventive ... gives epic fantasy a much-needed breath of fresh air' Saladin Ahmed.
'Beyond ambitious in scope, The Grace of Kings may be daunting at first, but soon you are swept into a world of political intrigue, hopeless sieges and compelling characters. Liu seamlessly blends philosophy and politics with tense battles and compelling action ... Sad, funny, poignant and addictive, this book will leave a lasting impression on the genre' SFX.
'Ken Liu creates some vivid and detailed characters that will be loved by fantasy fans ... a fresh and original fantasy story ... A triumph in storytelling' Starburst Magazine (rating: 9/10).
'A fascinating start to the silk punk Dandelion Dynasty series providing multi-layered fantasy with an additional take on transposed Ancient Chinese history' Bookbag.

Ken Liu is the winner of the Nebula, Hugo, Locus, World Fantasy, Sidewise, and Science Fiction & Fantasy Translation Awards. He is the author of The Grace of Kings and The Wall of Storms, in his epic series The Dandelion Dynasty. He is also the translator of Cixin Liu's Hugo-winning and Nebula-nominated The Three-Body Problem.

GOR010575617
The Grace of Kings by Ken Liu
Ken Liu
The Dandelion Dynasty
Used - Like New
Paperback
Head of Zeus
2016-03-21
640
1784973238
9781784973230
N/A
Book picture is for illustrative purposes only, actual binding, cover or edition may vary.
This is a used book - there is no escaping the fact it has been read by someone else and it will show signs of wear and previous use. Overall we expect it to be in very good condition, but if you are not entirely satisfied please get in touch with us.