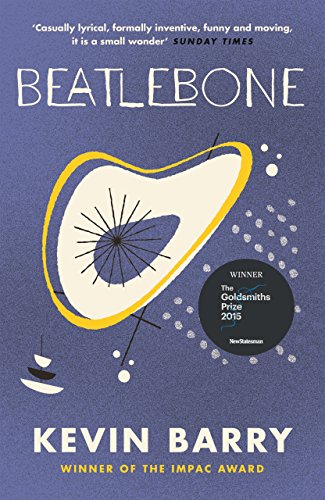 WINNER OF THE GOLDSMITHS PRIZE SHORTLISTED FOR THE IRISH BOOK AWARDS "John is so many miles from love now and home. This is the story of his strangest trip." A novel of family, ghosts, love, music and the quest for truth, Beatlebone recounts a wild journey through the west of Ireland in 1978. At its helm is John, a maddened genius fleeing fame and seeking peace. With his deadpan Irish driver, Cornelius, at his side, John is hellbent on reaching the Island of Dorinish, an assignment he arranged ten years before. Lyrical, freewheeling, quixotic and fun, Beatlebone is a sad and beautiful comedy.

Casually lyrical, formally inventive, funny and moving, it is a small wonder * * Sunday Times * *
Maps the long-rumored territory between James Joyce and John Lennon with poetic precision and a wised-up but loving eye. It rewards the fan of both those artists yet stands on its own two (or maybe a shaggy dog's four) feet . . . Funny and sneakily informative . . . I read the final pages as slowly as I could in a vain attempt to keep the dream from being over -- MICHAEL CHABON
Books like this come along once in a generation * * New York Times * *
Gloriously freewheeling . . . a tale of fame, freaks, bad liquor and bad weather * * Guardian * *
Superb . . . Beatlebone is a novel of necessary invention: profound, funny, hard to pin down * * Irish Times * *
Beatlebone is as gloriously confounding and as wondrously welcome as a hatching hawk's egg in a Christmas cracker -- NIALL GRIFFITHS
The most arresting and original writer to emerge from these islands in years -- IRVINE WELSH
Beatlebone is a rule-breaking novel, a strange and fascinating look at the mystery of creative inspiration * * Financial Times * *
A strange and brilliant experiment into showing your working. It's thematically dense yet supremely readable * * Metro * *
I think Kevin Barry is two kinds, if not three kinds, of a genius . . . wonderful storytelling . . . enormously cinematic -- TOM SUTCLIFFE * * BBC RADIO 4 SATURDAY REVIEW * *
Mingling surreal black humour and breakdown, Beatlebone is a wild cascade of language and imagery, rich in wordplay and referential resonance. Beneath the glittering surface Barry is giving us a vanitas on fame and celebrity. Remember the date is 1978. The real-life endgame will be played out very soon * * Spectator * *
As ever with Barry, the dialogue is a joy, tapping into a rich vein of humorous melancholy . . . this is a sharp, likeable book that moves deftly between warm comedy and a grimmer concern with Lennon's parentless childhood with the 'dead love stories' that 'make us' * * Sunday Times * *
A profound, mad and intriguing novel. Too often novels about great artists shy away from attending to those very creative processes that made them great. Beatlebone is a committed, brutal portrait * * Literary Review * *
The kind of next-level literature that inspires, even incites another generation of natural-born wordsmiths to write big and bold * * New York Times Book Review * *
There's music to Barry's prose: Smart rhythms dart through his sentences; taut bridges join his paragraphs; the tinge of hysteria serves to animate his characters and their surroundings. His dialogue is whimsical, sometimes hilarious, catching the idiom of the local life, and, in Beatlebone, nailing John Lennon, the wittiest and darkest Beatle, spot on * * Slate * *
A genius of the language, teasing out impressionistic riffs that channel emotion into words * * Los Angeles Times * *
Beatlebone is glorious, savoury stuff - part lark, part meditation, and a tiny part excavation * * Boston Globe * *

Kevin Barry is the author of the novels Beatlebone, City of Bohane and Night Boat to Tangier and the story collections Dark Lies the Island and There Are Little Kingdoms. His awards include the IMPAC Dublin Literary Award, the Goldsmiths Prize, the Sunday Times EFG Short Story Prize and the Lannan Foundation Literary Award. His stories and essays have appeared in the New Yorker, Granta and elsewhere. He also works as a playwright and screenwriter, and he lives in County Sligo, Ireland. In 2019, Night Boat to Tangier was longlisted for the Booker Prize.

GOR007610611
Beatlebone by Kevin Barry
Kevin Barry
Used - Very Good
Paperback
Canongate Books Ltd
2016-06-30
272
1782116168
9781782116165
Winner of The Goldsmiths Prize 2015 (UK) Short-listed for Irish Book Awards 2015 (UK) Short-listed for James Tait Black Prize for Fiction (UK).
Book picture is for illustrative purposes only, actual binding, cover or edition may vary.
This is a used book - there is no escaping the fact it has been read by someone else and it will show signs of wear and previous use. Overall we expect it to be in very good condition, but if you are not entirely satisfied please get in touch with us.