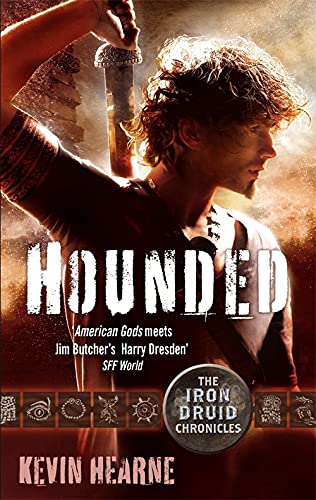 ***OVER A MILLION COPIES OF THE IRON DRUID BOOKS SOLD***

Atticus O'Sullivan, last of the Druids, lives peacefully in Arizona, running an occult bookshop and shape-shifting in his spare time to hunt with his Irish wolfhound. His neighbors and customers think that this handsome, tattooed Irish dude is about twenty-one years old - when in actuality, he's twenty-one centuries old. Not to mention: He draws his power from the earth, possesses a sharp wit, and wields an even sharper magical sword known as Fragarach, the Answerer.

Unfortunately, a very angry Celtic god wants that sword, and he's hounded Atticus for centuries. Now the determined deity has tracked him down, and Atticus will need all his power - plus the help of a seductive goddess of death, his vampire and werewolf team of attorneys, a sexy bartender possessed by a Hindu witch, and some good old-fashioned luck of the Irish - to kick some Celtic arse and deliver himself from evil.

Praise for the Iron Druid Chronicles:

'Atticus and his crew are a breath of fresh air! . . . I love, love, love this series' My Bookish Ways

'Entertaining, steeped in a ton of mythology, populated by awesome characters' Civilian Reader

'This is one series no fantasy fan should miss. Mystery, suspense, magic and mayhem' SciFiChick

HAVE YOU TRIED . . .
Kevin Hearne's epic fantasy novel A PLAGUE OF GIANTS - described by Delilah S. Dawson as 'a rare masterpiece that's both current and timeless . . . merging the fantasy bones of Tolkien and Rothfuss with a wide cast of characters who'll break your heart'. Out now!

American Gods meets Jim Butcher's Harry Dresden * SFFWorld *
Atticus and his crew are a breath of fresh air! . . . I love, love, love this series * My Bookish Ways *
Entertaining, steeped in a ton of mythology, populated by awesome characters * Civilian Reader *
This is one series no fantasy fan should miss. Mystery, suspense, magic and mayhem * SciFiChick *

Kevin Hearne hugs trees, pets doggies, and rocks out to heavy metal. He also thinks tacos are a pretty nifty idea. He is the author of the Seven Kenning series, which starts with A Plague of Giants, and the New York Times bestselling series Iron Druid Chronicles.

GOR003044535
Hounded: The Iron Druid Chronicles by Kevin Hearne
Kevin Hearne
Iron Druid Chronicles
Used - Very Good
Paperback
Little, Brown Book Group
2011-09-01
320
0356501191
9780356501192
N/A
Book picture is for illustrative purposes only, actual binding, cover or edition may vary.
This is a used book - there is no escaping the fact it has been read by someone else and it will show signs of wear and previous use. Overall we expect it to be in very good condition, but if you are not entirely satisfied please get in touch with us.