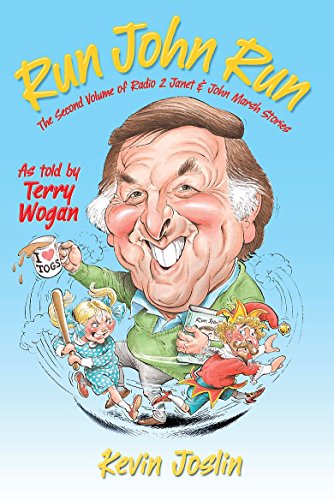 From the late, great Sir Terry Wogan's Radio 2 breakfast show, this is volume 2 of the much-loved Janet & John stories.

Do you like shopping? John does. When Janet and John go to the big department store, Janet says, 'I'm going to have a look around the kitchen department. I'll see you back here in half an hour.' Janet has bought some new kitchen scissors.
Janet says, 'Have you been a good boy?' 'Yes,' says John. 'I saw Mrs. Llewellyn. She was complaining that her husband wasn't very well served in the trouser department and said that I looked like a man who knew how to treat a lady properly. After that I saw Mrs. Steward. She said she was always on the lookout for a partner with good ballroom and asked if I'd like to come to her special club and learn how to Mazurka'. Do you know how to get scissors out of plastic packaging in under a second? Janet does. See Janet chase John. Run John, run.

During its transmission, 8 million listeners to BBC Radio 2's Wake Up To Wogan were beguiled and bewitched by the naughty but nice adventures of John and his wife Janet. As a favourite segment, the stories moved with Terry Wogan to his Sunday morning show, Weekend Wogan. In the style of children's stories of yesteryear, John gets up to all sorts. Then he tells Janet all about his day, by which time every perfectly innocent big end, back passage and stiff one acquires a whole new meaning. This second instalment promises even more devilish double entendres, with over seventy new stories to tickle your funny bones.

Kevin Joslin was born in 1958, so is really old enough to know better. He runs the TOGs website, www.togs.org, an online home for the bewildered followers of Terry Wogan's BBC Radio 2 shows, and has written a good deal of nonsense for those shows under a variety of assumed names.

GOR003310167
9780755361854
0755361857
Run, John, Run by Kevin Joslin
Kevin Joslin
Used - Very Good
Hardback
Headline Publishing Group
2011-10-13
320
N/A
Book picture is for illustrative purposes only, actual binding, cover or edition may vary.
This is a used book - there is no escaping the fact it has been read by someone else and it will show signs of wear and previous use. Overall we expect it to be in very good condition, but if you are not entirely satisfied please get in touch with us
Trustpilot