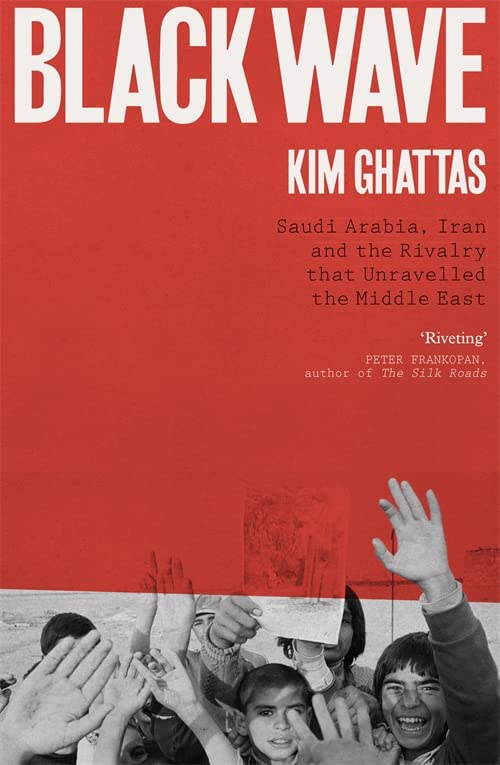 Out of Stock
£13.99
A timely and unprecedented examination of how the modern Middle East unravelled, and why it started with the pivotal year of 1979
Very Good
Only 0 left

Black Wave: Saudi Arabia, Iran and the Rivalry That Unravelled the Middle East by Kim Ghattas

A timely and unprecedented examination of how the modern Middle East unravelled, and why it started with the pivotal year of 1979

'What happened to us?'

For decades, the question has haunted the Arab and Muslim world, heard across Iran and Syria, Saudi Arabia and Pakistan, and in the author's home country of Lebanon. Was it always so? When did the extremism, intolerance and bloodletting of today displace the region's cultural promise and diversity?

In Black Wave, award-winning journalist and author Kim Ghattas argues that the turning point in the modern history of the Middle East can be located in the toxic confluence of three major events in 1979: the Iranian revolution; the siege of the Holy Mosque in Mecca; and the Soviet invasion of Afghanistan. Before this year, Saudi Arabia and Iran had been working allies and twin pillars of US strategy in the region - but the radical legacy of these events made them mortal enemies, unleashing a process that transformed culture, society, religion and geopolitics across the region for decades to come.

Drawing on a sweeping cast of characters across seven countries over forty years, Ghattas demonstrates how this rivalry for religious and cultural supremacy has fed intolerance, suppressed cultural expression, encouraged sectarian violence, birthed groups like Hezbollah and ISIS and, ultimately, upended the lives of millions. At once bold and intimate, Black Wave is a remarkable and engrossing story of the Middle East as it has never been told before.

[A] blistering account ... Ghattas knows how to tell a cracking story ... Black Wave is a cri de coeur, an action-packed modern history written with the pace of a detective thriller -- Justin Marozzi * Sunday Times *
Fascinating ... Highly readable ... The publication of this book, Black Wave, could not be better timed -- James Barr, 'Book of the Week' * The Times *
Wonderfully readable ... A vivid, indispensable guide -- Ian Black, 'Book of the Week' * Observer *
A brilliant book, written with verve and style. It is not just essential reading, but thoroughly riveting as well. I could not put it down -- Peter Frankopan * author of The Silk Roads *
In this ambitious and highly readable book, Kim Ghattas tells the story of how Middle Eastern political and religious leaders betrayed their people. Her bold thesis that the events of 1979 scattered the seeds of destruction is revelatory and original. It is easy to despair but she finds hope too - only by understanding what happened can the next generation find a way forward -- Lindsey Hilsum * International Editor, Channel 4 News and author of In Extremis *
Vivid reporting, deep analysis. This is a fascinating and important book. Kim Ghattas tracks the rivalry between Saudi Arabia and Iran as it pulled the Middle East and the wider Muslim world out of shape. Black Wave is essential reading if you want to understand why the region slid into religious extremism and blood-soaked sectarianism -- Jeremy Bowen, BBC Middle East Editor and author of The Arab Uprisings
Skillfully written and scrupulously researched, Black Wave is an essential book in understanding the origins of the modern conflicts in the Middle East -- Lawrence Wright * Pulitzer Prize-winning author of The Looming Tower *
A brilliant piece of work. Ghattas reveals how the competition between Tehran and Riyadh led to the instrumentalization of Islam to destroy cosmopolitanism, force women to veil, and to mobilize sectarian extremists -- Emma Sky * Senior Fellow at Yale University's Jackson Institute and author of In a Time of Monsters *
The framing of Black Wave is as important as the content. Kim Ghattas portrays the last four decades across the Middle East as a kind of Islamic Dark Ages, a world dimmed behind a curtain of violence, misogyny, and religious extremism. In exploring how this blackness came to be, she both reminds us of a brighter past and holds out the possibility of a future of light. It's a powerful and important book -- Anne-Marie Slaughter, CEO of the New America Foundation
Brilliant ... Reveals in masterful detail the rivalry between Saudi Arabia and Iran, and its pernicious effect on the wider region, from 1979 to the present day - a sharp and sobering analysis -- Zeid Ra'ad Al Hussein, former UN High Commissioner for Human Rights
Brutally honest, perfectly researched and brilliantly written ... A must-read for outsiders and people in the region -- Marwen Muasher, Vice President for Studies at the Carnegie Endowment for International Peace and former minister of foreign affairs of Jordan
A timely and welcome guide ... Well-researched and elegantly written, Black Wave focuses on the lives of a number of key individuals - from guerrilla fighters, revolutionary clerics and spy chiefs to Sufi leaders and journalists. * Financial Times *
Sweeping and authoritative ... Ghatta's narrative upends ... Western misconception * New York Times *
The book is packed with accounts of ambition, treachery and cruelty - with a wealth of historical detail down to the hour of the day... She serves up a wealth of human interest wrapped in ambience and atmosphere. She paints riveting portraits of the protagonists. * Wall Street Journal *
A compelling account of the entrenched rancour between two important countries in the Middle East. Emmy-winning journalist Ghattas details a depressing "race to the bottom" since 1979, but she also celebrates those courageously fighting for freedom in such a toxic environment. -- Books of the Month * Observer *
Profoundly moving ... There is a simmering anger not far below the surface of her book. It is a gripping tale. It is a tract for our times. Read and weep. But also, like Ghattas, allow yourself to hope. * New Statesman *

Kim Ghattas is an Emmy-award winning journalist and writer who covered the Middle East for twenty years for the BBC and the Financial Times. She has also reported on the U.S State Department and American politics. She has been published in the Atlantic, the Washington Post and Foreign Policy, and is currently a non-resident scholar at the Carnegie Endowment for International Peace in Washington. Born and raised in Lebanon, she now lives between Beirut and Washington D.C.

GOR010318066
Black Wave: Saudi Arabia, Iran and the Rivalry That Unravelled the Middle East by Kim Ghattas
Kim Ghattas
Used - Very Good
Hardback
Headline Publishing Group
2020-01-17
400
1472271092
9781472271099
N/A
Book picture is for illustrative purposes only, actual binding, cover or edition may vary.
This is a used book - there is no escaping the fact it has been read by someone else and it will show signs of wear and previous use. Overall we expect it to be in very good condition, but if you are not entirely satisfied please get in touch with us.