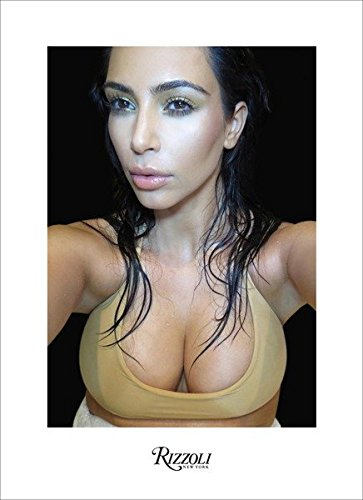 The selfie photography of Kim Kardashian, featuring many never-before-seen personal images from one of the most recognizable and iconic celebrities in the world.

The selfie photography of Kim Kardashian, featuring many never-before-seen personal images from one of the most recognizable and iconic celebrities in the world. From her early beginnings as a wardrobe stylist, Kim Kardashian has catapulted herself into becoming one of the most recognizable celebrities in Hollywood. Hailed by many (including Givenchy designer Riccardo Tisci) as the modern-day personification of Marilyn Monroe, Kim has become a true American icon. With her curvaceous style, successful reality TV show Keeping Up with the Kardashians, DASH clothing store, makeup and perfume lines, she has acquired a massive fan following in the multi-millions. Through social media (Instagram, Twitter, and Facebook), Kim connects with her fans on a daily basis, sharing details of her life with her selfie photography. Widely regarded as a trailblazer of the "selfie movement"-a modern-day self-portrait of the digital age-Kim has mastered the art of taking flattering and highly personal photos of oneself. For the first time in print, this book presents some of Kim's favourite selfies in one volume-from her favourite throwback images to current ultra-sexy glam shots-and provides readers with a behind-the-scenes look into this larger-than-life star.
"The first lady of #fame - the 100 Most Influential People" -Time Magazine

"Kim Kardashian already broke the internet. Now she's poised to break the best-seller lists. . . . It's easy to mock - indeed, the title almost does it for you - but this seemingly throw-away collection may end up being just as much a part of pop-art history as when Andy Warhol painted soup cans." -Daily News

"Kim Kardashian is the queen of selfies, and she's planning to make sure everyone knows it in her upcoming book, Selfish." -MTV News

"Now there's a book cover if we've ever seen one! . . . this book is obviously made for her biggest fans. Not to mention it includes previously unseen selfies!" -USA Today

"Kim Kardashian can take a selfie anywhere, and we mean anywhere!" -E! News

"In her new coffee-table book, Selfish, the reality star documents nine years of her life in selfies - some seen by millions, others revealed for the first time." -Harper's Bazaar

"Now you can get between the covers with her-- hardcovers, that is. With more than 400 pages of intimate snaps (including bikini selfies, lingerie selfies and, yes, several nude selfies), flipping through her new photo book Selfish, published by art-house giant Rizzoli, feels like scrolling through a fabulously rich and beautiful friend's well-curated smartphone." -Playboy Magazine

"As they say, you have to love yourself first! After months of anticipation (and just a touch of eye-rolling), Kim Kardashian's selfie-filled coffee table book, aptly entitled Kim Kardashian's Selfish, [has] finally arrive[d]." -US Weekly

"Kim Kardashian has joined the ranks of Giacometti, da Vinci, Lichtenstein, O'Keeffe, and just about every other revered artist of any era: she, too, now has a Rizzoli-published book devoted to her work at the forefront of an artistic movement. Indeed, Rizolli notes that she's 'widely regarded as a trailblazer of the 'selfie movement.'" -Flavorwire.com

"[Kim K's] the queen of the selfie. And her soon-to-be released hardcover book . . . should be all the evidence she'll need to maintain that throne." -CR Fashion Book

"As it stands, Kim Kardashian West holds the title for most Instagram followers (at 30 million) just behind the platform's own account (at 60 million). An average Kim K selfie garners upwards of 650,000 likes with her wedding photo receiving 2.5 million likes. With all that in mind, there's no question that Kim's controversial new book, Selfie, is going to fly off the shelves." -V Magazine

"From her favorite throwback images to current ultra-sexy glam shots, Selfish will provide readers with a behind-the-scenes look into Kardashian's life." -In Style Magazine


A new mum to her daughter, North, and happily married to the rapper Kanye West, Kim Kardashian is on top of the world, and this collection of hand-picked images from her personal archive is a tribute to her fans who have supported her through her very highly publicized journey.
GOR007020285
9780789329202
0789329204
Kim Kardashian Selfish by Kim Kardashian
Kim Kardashian
Used - Very Good
Hardback
Universe Publishing
2015-05-05
448
N/A
Book picture is for illustrative purposes only, actual binding, cover or edition may vary.
This is a used book - there is no escaping the fact it has been read by someone else and it will show signs of wear and previous use. Overall we expect it to be in very good condition, but if you are not entirely satisfied please get in touch with us
Trustpilot