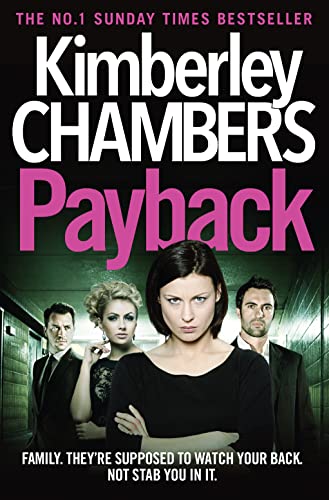 Used Price
£4.49
New RRP £8.99
Free Shipping in the UK
*If you love The Butlers, meet QUEENIE! Kimberley Chambers' new No.1 bestseller and prequel to The Butler series is out now!*

Family. They're supposed to watch your back. Not stab you in it.

*If you love The Butlers, meet QUEENIE! Kimberley Chambers' new No.1 bestseller and prequel to The Butler series is out now!*

Family. They're supposed to watch your back. Not stab you in it.

When the enemy is one of your own, the payback is twice as hard.

The Butler brothers are the Kings of the East End, and their motto is 'what goes around, comes around'.

In their world, family counts; so when the truth about Vinny's cousin's death comes to light, it rocks the Butlers to the core. One by one, Vinny's friends and family are turning against him...

Then, the unimaginable happens - Vinny's little daughter Molly goes missing. She's the one chink of light in all their lives, and the one they'd commit murders to bring back.

But is it already too late for that?

The Butlers are back in this gripping, compulsive sequel to THE TRAP.

'[a] fast-paced tale with gritty authenticity' The Guardian

GOR005706738
Payback by Kimberley Chambers
Kimberley Chambers
Used - Very Good
Paperback
HarperCollins Publishers
2014-06-19
528
0007435053
9780007435050
N/A
Book picture is for illustrative purposes only, actual binding, cover or edition may vary.
This is a used book - there is no escaping the fact it has been read by someone else and it will show signs of wear and previous use. Overall we expect it to be in very good condition, but if you are not entirely satisfied please get in touch with us.