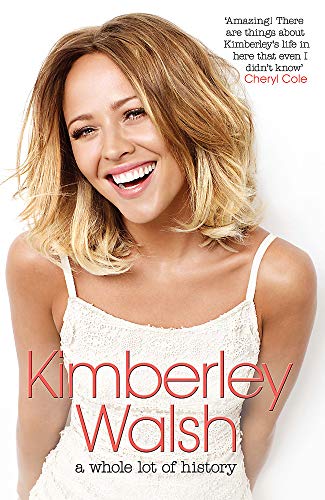 A Whole Lot of History by Kimberley Walsh

The official autobiography from the Girls Aloud and Strictly Come Dancing star.

A Whole Lot of History by Kimberley Walsh

In 2002 - along with Cheryl Cole, Nadine Coyle, Sarah Harding and Nicola Roberts - Kimberley Walsh won a place in the Popstars The Rivals band Girls Aloud, and her life changed forever.

Ten years later, after six platinum albums, twenty top-ten singles, a Brit Award, an entry in the Guinness Book of Records and a triumphant sell-out reunion tour, the girls have decided to go their separate ways. What better time for Kimberley - a professional, hardworking businesswoman as well as a multi-talented actress and songstress - to tell her story. What was it like behind the scenes of a such a hugely successful band? Was there any truth in the rumours of endless feuds within Girls Aloud? How did she manage to maintain such a strong loving relationship with her partner Justin during the 10 years she was in the band? And how does it feel when your best friend becomes the most famous person in the land?

Full of the warmth and laughter that makes Kimberley such a national treasure, with lots of insider secrets revealed too, this book is like curling up on the sofa for a gossip with a friend. There is lots still to come from the UK's favourite Northern lass. Just watch this space.

Since she shot to fame in 2002 after appearing on Popstars: The Rivals, Kimberley Walsh has been best known as one-fifth of Girls Aloud, the most successful British girl-band ever. Her career has gone from strength to strength, and after twenty top-ten singles with the band, she's now striking out on her own. A starring role in West End smash Shrek The Musical was followed by a glittering turn on Strictly Come Dancing, where she made it all the way to the final - a true test of her popularity. Now embarking on a solo career, Kimberley has finally decided to tell her story.
GOR005214050
9781472209306
1472209303
A Whole Lot of History by Kimberley Walsh
Kimberley Walsh
Used - Very Good
Hardback
Headline Publishing Group
2013-09-26
352
N/A
Book picture is for illustrative purposes only, actual binding, cover or edition may vary.
This is a used book - there is no escaping the fact it has been read by someone else and it will show signs of wear and previous use. Overall we expect it to be in very good condition, but if you are not entirely satisfied please get in touch with us
Trustpilot