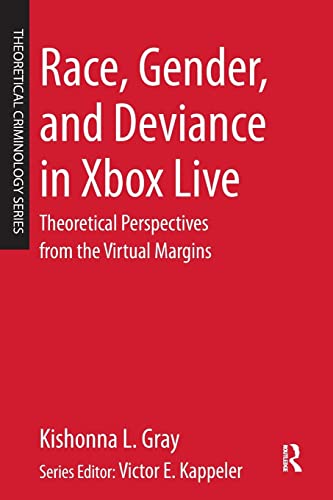 Race, Gender, and Deviance in Xbox Live provides a much-needed theoretical framework for examining deviant behavior and deviant bodies within one of the largest virtual gaming communities-Xbox Live. Previous research on video games has focused mostly on violence and examining violent behavior resulting from consuming this medium. This limited scope has skewed criminologists' understanding of video games and video game culture. Xbox Live has proven to be more than just a gaming platform for users. It has evolved into a multimedia entertainment outlet for more than 20 million users. This book examines the nature of social interactions within Xbox Live, which are often riddled with deviant behavior, including but not limited to racism and sexism. The text situates video games within a hegemonic framework deploying whiteness and masculinity as the norm. The experiences of the marginalized bodies are situated within the framework of deviance as they fail to conform to the hegemonic norm and become victims of racism, sexism, and other types of harassment.

Drawing from a range of sociological theories of race, gender, and collective behavior, this book provides an intersectional analysis of virtual communities-specifically Xbox Live (an online video gaming platform). Using game narrative and ethnographic data, Gray illuminates how video games serve as ideological projects that reproduce the unequal representation and treatment of people of color and women within the gaming community. Accessibly written and supported by rich qualitative data, this book could be invaluable in sociology and game design courses alike.

Kishonna L. Gray is an Assistant Professor in the School of Justice Studies at Eastern Kentucky University. She completed her Ph.D in Justice Studies at Arizona State University with a concentration in Media, Technology, & Culture. Her research and teaching interests incorporate an intersecting focus on marginalized identities (race, gender, class, sexuality, citizenship, etc.) and new media (online news forums, social media, virtual gaming communities). She has published in a variety of outlets, including Ada: A Journal of Gender, New Media, & Technology; New Review of Hypermedia and Multimedia; Crime, Media, Culture; the Bulletin of Science, Technology, & Society; Information, Communication, & Society; and the Journal of International and Intercultural Communication. Dr. Gray regularly posts to her blog at www.kishonnagray.com on topics related to race, gender, new media, and popular culture. She welcomes collaborations working with colleagues across the country, graduate students, and others interested in topics related to race, gender, new media, and video games.

Part I: The Games

Chapter 2: Racing and Gendering the Game

GOR010293755
Race, Gender, and Deviance in Xbox Live: Theoretical Perspectives from the Virtual Margins by Kishonna L. Gray
Kishonna L. Gray
Used - Very Good
Paperback
Taylor & Francis Inc
2014-03-27
89
0323296491
9780323296496
N/A
Book picture is for illustrative purposes only, actual binding, cover or edition may vary.
This is a used book - there is no escaping the fact it has been read by someone else and it will show signs of wear and previous use. Overall we expect it to be in very good condition, but if you are not entirely satisfied please get in touch with us.