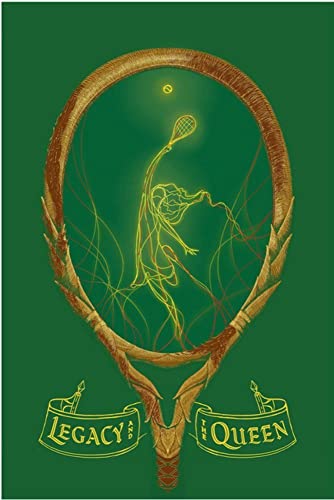 Legacy and the Queen
by Kobe Bryant

Legacy and the Queen Summary

Legacy and the Queen by Kobe Bryant

#1 New York Times Bestseller From the mind of basketball legend and Academy Award-winning storyteller Kobe Bryant comes a new tale of finding your inner magic against all odds. GAME. SET. MAGIC. Game - Tennis means life and death for the residents of the magical kingdom of Nova, and for twelve-year-old Legacy, it's the only thing getting her through the long days taking care of the other kids at the orphanage. That's all about to change when she hears about Silla's tournament. Set - Silla, the ruler of Nova, hosts an annual tournament for the less fortunate of her citizens to come and prove themselves and win entrance to the Academy, where they can train to compete at nationals. The prize is Silla's favor and enough cash to keep open the orphanage, and Legacy has her heart set on both. Magic - What Legacy has yet to know is that the other players have something besides better skills and more money than she does. In Nova, tennis can unlock magic. Magic that Silla used to save the kingdom long ago and magic that her competitors have been training in for months already. Now, with the world turned against her and the orphanage at stake, Legacy has to learn to use her passion for the game to rise above those around her and shine.

Customer Reviews - Legacy and the Queen

Legacy and the Queen Reviews

"Legacy is a strong character, and the secondary characters also have interesting backstories. . . . Magic, tennis action, and family secrets are woven into an original coming-of-age tale."-Kirkus Reviews

"Wonderful. . . . [This] story of a young heroine who must find friends at a specialized school so that she can prove herself to her privileged critics has plenty of charm, and Legacy is a protagonist worth cheering for."-Publisher's Weekly

Kobe Bryant was an Academy Award winner, a New York Times best-selling author, and the CEO of Granity Studios, a multimedia content creation company. He was also a five-time NBA champion, two-time NBA Finals MVP, NBA MVP, and two-time Olympic gold medalist. Above all else, he was a loving husband and a doting father to four girls. In everything he built, Kobe was driven to teach the next generation how to reach their full potential. He believed in the beauty of the process, in the strength that comes from inner magic, and in achieving the impossible. His legacy continues today. Annie Matthew is a novelist and a poet. In a former life, she was a professional athlete. She now lives in Iowa with her gray furry dog, Gus.

GOR010912637
Legacy and the Queen by Kobe Bryant
Kobe Bryant
Used - Like New
Hardback
Granity Studios
2019-09-03
208
194952003X
9781949520033
N/A
Book picture is for illustrative purposes only, actual binding, cover or edition may vary.
The book has been read, but looks new. The book cover has no visible wear, and the dust jacket is included if applicable. No missing or damaged pages, no tears, possible very minimal creasing, no underlining or highlighting of text, and no writing in the margins.