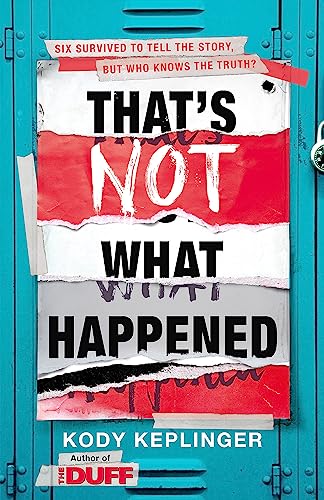 That's Not What Happened
by Kody Keplinger

In Stock
9,89 £
The next hotly anticipated YA novel from bestselling US sensation Kody Keplinger, author of THE DUFF and RUN
New9,89 £
5 in stock

That's Not What Happened Summary

That's Not What Happened by Kody Keplinger

Six survived to tell the story, but who knows the truth? The next hotly anticipated YA novel from bestselling US sensation Kody Keplinger, author of THE DUFF and RUN

It's been three years since the Virgil County High School Massacre. Three years since my best friend, Sarah, was killed in a bathroom stall during the mass shooting. Everyone knows Sarah's story - that she died proclaiming her faith.

But it's not true.

I know because I was with her when she died. I didn't say anything then, and people got hurt because of it. Now Sarah's parents are publishing a book about her, so this might be my last chance to set the record straight . . . but I'm not the only survivor with a story to tell about what did - and didn't - happen that day.

Except Sarah's martyrdom is important to a lot of people, people who don't take kindly to what I'm trying to do. And the more I learn, the less certain I am about what's right. I don't know what will be worse: the guilt of staying silent or the consequences of speaking up . . .

That's Not What Happened Reviews

What a book... I honestly can't recommend this book enough.There wasn't one time I sat down to read it that I didn't cry; it's so incredibly moving. * Beautiful Bookland Blog *
That's Not What Happened gives readers a lot to think about. Gossip, rumour, sensationalist reporting - these aren't healthy things. And truth isn't as simple a thing as we might think. We should all take notice of the themes of this story. * The Bookbag *
It's an unsettling read... gripping and thought-provoking. -- Claire Hennessy * Irish Times *

Kody Keplinger was born and raised in rural western Kentucky. She always enjoyed writing and began working on novels when she was eleven. She wrote her first published work, THE DUFF, at seventeen. Since then, Kody has written two other novels, SHUT OUT and A MIDSUMMER'S NIGHTMARE.

Kody writes for YA Highway, a blog devoted to the young adult publishing industry. She is also a featured writer for Poptimal.com, a popular pop culture blog, where she reviews TV shows and movies.