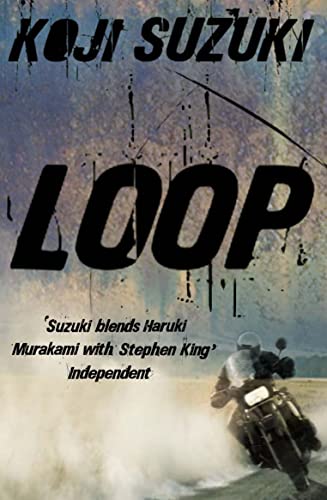 Stunning Japanese novel with a chilling twist - the follow-up to Ring and Spiral.

Stunning Japanese novel with a chilling twist - the follow-up to Ring and Spiral.

Kaoru's father, Hideyuki, lies dying in a Tokyo hospital, his body ravaged by viral cancer. This nightmarish incurable disease has sprung out of nowhere and has begun to affect organisms all over the planet.

Twenty years ago Hideyki worked on a virtual reality project which replicated evolution on earth, called the Loop. The project failed when the organisms within it inexplicably stopped reproducing normally and started cloning. Nearly all of the other scientists who worked on the Loop are already dead - from cancer.

To get to the heart of the mystery, Kaoru must travel to the other side of the planet, to the Mojave desert. The secret he encounters there will overturn everything he thought he knew about the world - and his own identity.

In this suspense-filled follow-up to `Ring' and `Spiral', Suzuki masterfully confounds the reader with a stunning new twist on the Ring mythology.

'Suzuki blends the dispassionate, inquisitive, sometimes terrifying urban character-types to be found in Haruki Murakami's work with the plot mechanics of a Stephen King or Michael Crichton' Kim Newman, Independent

`The pace doesn't slacken for a moment ... a guaranteed page-turner.' Observer

`Bristles with menace and fear.' Uncut

Koji Suzuki is a literary star in his native Japan, where he is also a respected writer on childcare, having brought up two daughters. `Ring', the first novel in the trilogy that concludes with `Loop' has sold 2.8 million copies to date and spawned a cult Japanese film that is fast becoming a classic, as well as a successful Hollywood remake. Koji Suzuki lives in Tokyo but loves to travel.

GOR001133706
Loop by Koji Suzuki
Koji Suzuki
Used - Very Good
Paperback
HarperCollins Publishers
2007-05-01
480
000717909X
9780007179091
N/A
Book picture is for illustrative purposes only, actual binding, cover or edition may vary.
This is a used book - there is no escaping the fact it has been read by someone else and it will show signs of wear and previous use. Overall we expect it to be in very good condition, but if you are not entirely satisfied please get in touch with us.