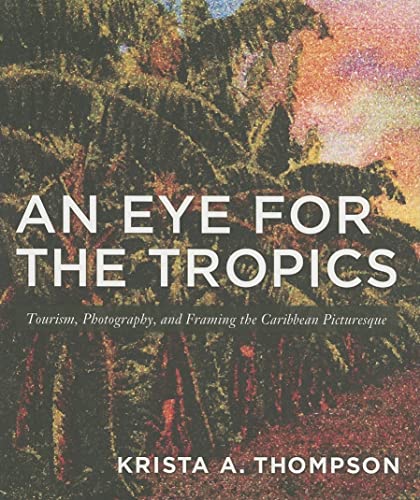 An Eye for the Tropics by Krista A. Thompson

A beautifully illustrated look at the aesthetics and implications of the visual images used to sell Jamaica and the Bahamas to tourists as "tropical paradises" from the 1880s through the 1930s.

An Eye for the Tropics: Tourism, Photography, and Framing the Caribbean Picturesque by Krista A. Thompson

Images of Jamaica and the Bahamas as tropical paradises full of palm trees, white sandy beaches, and inviting warm water seem timeless. Surprisingly, the origins of those images can be traced back to the roots of the islands' tourism industry in the 1880s. As Krista A. Thompson explains, in the late nineteenth century, tourism promoters, backed by British colonial administrators, began to market Jamaica and the Bahamas as picturesque "tropical" paradises. They hired photographers and artists to create carefully crafted representations, which then circulated internationally via postcards and illustrated guides and lectures.

Illustrated with more than one hundred images, including many in color, An Eye for the Tropics is a nuanced evaluation of the aesthetics of the "tropicalizing images" and their effects on Jamaica and the Bahamas. Thompson describes how representations created to project an image to the outside world altered everyday life on the islands. Hoteliers imported tropical plants to make the islands look more like the images. Many prominent tourist-oriented spaces, including hotels and famous beaches, became off-limits to the islands' black populations, who were encouraged to act like the disciplined, loyal colonial subjects depicted in the pictures.

Analyzing the work of specific photographers and artists who created tropical representations of Jamaica and the Bahamas between the 1880s and the 1930s, Thompson shows how their images differ from the English picturesque landscape tradition. Turning to the present, she examines how tropicalizing images are deconstructed in works by contemporary artists-including Christopher Cozier, David Bailey, and Irenee Shaw-at the same time that they remain a staple of postcolonial governments' vigorous efforts to attract tourists.

"In An Eye for the Tropics, Krista A. Thompson's guiding preoccupation is with the construction of the Anglo-Creole Caribbean within a colonial regime of visual and discursive representation. How, she asks, was the Caribbean framed within the ocular terms of a tropical paradise as a space of verdant, quasi-primitive desire? The story she tells to answer this question is at once historically detailed and theoretically acute."-David Scott, author of Conscripts of Modernity: The Tragedy of Colonial Enlightenment

"Krista A. Thompson masterfully uses early-twentieth-century postcards to show how social, political, and racial issues are embedded in postcard imagery, while simultaneously analyzing current collecting practices. She makes substantial new and intriguing contributions to the understanding not simply of the historical tropicalization of the islands but of the persistence of such propagandistic attitudes in the economic survival of the islands today."-Judith Bettelheim, Professor of Art and Art History, San Francisco State University
"One of the first studies to critically interrogate the visual culture of the Caribbean through the lens of both popular art and fine art, it's an important book that, no doubt, will continue to force the question of an distinct Caribbean art history, singular from a similarly contentious, African American chronicle, and impacted by the parallel histories of economic underdevelopment in the region and Western nostalgia for a present-day, accessible paradise." -- Richard J. Powell * Small Axe *

Krista A. Thompson is Assistant Professor of Art History and African American Studies at Northwestern University.

Illustrations ix
Abbreviations xiii
Acknowledgments xv
Introduction: Tropicalization: The Aesthetics and Politics of Space in Jamaica and the Bahamas 1
1. Framing "The New Jamaica": Feasting on the Picturesque Tropical Landscape 27
2. Developing the Tropics: The Politics of the Picturesque in the Bahamas 92
3. Through the Looking Glass: Visualizing the Sea as Icon of the Bahamas 156
4. Diving into the Racial Waters of Beach Space in Jamaica: Tropical Modernity and the Myrtle Bank Hotel's Pool 204
5. "I Am Rendered Speechless by Your Idea of Beauty": The Picturesque in History and Art in the Postcolony 252
Epilogue: Tropical Futures: Civilizing Citizens and Uncivilizing Tourists 297
Notes 307
References 331
Illustration Credits 349
Index 355
NPB9780822337645
9780822337645
0822337649
An Eye for the Tropics: Tourism, Photography, and Framing the Caribbean Picturesque by Krista A. Thompson
Krista A. Thompson
Objects/Histories
New
Paperback
Duke University Press
2007-03-15
392
N/A
Book picture is for illustrative purposes only, actual binding, cover or edition may vary.
This is a new book - be the first to read this copy. With untouched pages and a perfect binding, your brand new copy is ready to be opened for the first time
Trustpilot