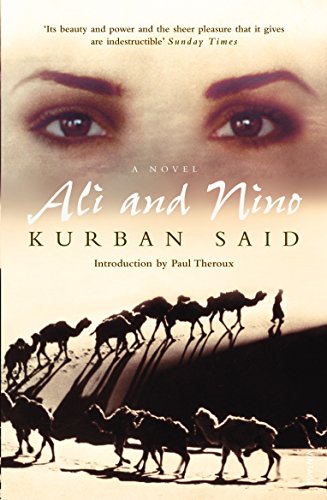 Ali And Nino
by Kurban Said

Used Price
£5.49
New RRP £8.99
Free Shipping in the UK
Ali Khan and Nino Kipiani live in the cosmopolitan, oil-rich capital of Azerbaijan which, at the beginning of the twentieth century, is a melting-pot of different cultures. As the Russians withdraw, the Turks advance, and Ali and Nino find themselves swept up in Azerbaijan's fight for independence.
Very Good Good Well Read

Ali And Nino by Kurban Said

Ali Khan and Nino Kipiani live in the cosmopolitan, oil-rich capital of Azerbaijan which, at the beginning of the twentieth century, is a melting-pot of different cultures. Ali is a Muslim, with his ancestors' passion for the desert, and Nino is a Christian Georgian girl with sophisticated European ways. Despite their differences, the two have loved each other since childhood and Ali is determined that he will marry Nino as soon as she leaves school. But there is not only the obstacle of their different religions and parental consent to overcome. The First World War breaks out. As the Russians withdraw, the Turks advance, and Ali and Nino find themselves swept up in Azerbaijan's fight for independence.

"Its beauty and power and the sheer pleasure that it gives are indestructible" * Sunday Times *
"Poignant and beautiful...alive with a vividly unique vision of colliding cultures and enduring love" * The Times *
"A blazing masterpiece... I cannot think of so moving a love story in modern fiction" * Washington Star *
"One feels as if one had dug up buried treasure...an epic cultural change that seems more immediate than this morning's headlines... An extraordinary novel" * New York Times *
"A beautiful novel" -- Paul Theroux

For a long time the identity of the author who used the pseudonym 'Kurban Said' to write Ali and Nino, published in Vienna in 1937, has been surrounded by controversy. Was it possible that the Austrian countess who signed the original publishing contract, Baroness Elfriede Ehrenfels, could have written a novel that displays such extraordinary insight into the atmosphere of pre-First World War Baku and intimate knowledge of Muslim culture? Recent research seems to prove, once and for all, that her friend Lev Nussimbaum, a Jew who had escaped Azerbaijan during the Russian Revolution and settled in Berlin, was the real 'Kurban Said'. Born in Baku in 1905, Nussimbaum had a passion for the Orient, and in his youth, converted to Islam. A flamboyant in the literary world of 1920s Berlin, he fled from Nazi Germany to Austria. Having then gone on to Italy, he ended up under house arrest in Positano, where he died of a rare blood disease in 1942. The outbreak of the Second World War could easily have meant that Ali and Nino was never discovered by an English-speaking audience. In the 1950s, however, Jenia Graman, a German who had settled in England during the war, found a copy on a Berlin bookstall, translated it into English, and had it published for a second time.

GOR001267358
Ali And Nino by Kurban Said
Kurban Said
Used - Very Good
Paperback
Vintage Publishing
2000-10-05
240
0099283220
9780099283225
N/A
Book picture is for illustrative purposes only, actual binding, cover or edition may vary.
This is a used book - there is no escaping the fact it has been read by someone else and it will show signs of wear and previous use. Overall we expect it to be in very good condition, but if you are not entirely satisfied please get in touch with us.