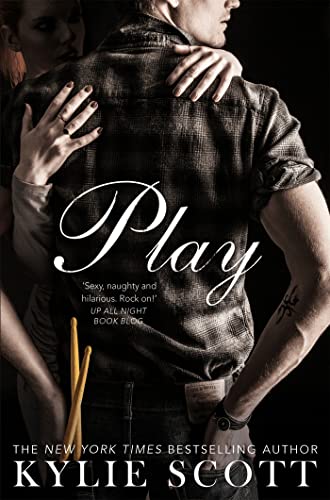 The second in the steamy Stage Dive series, Play is a passionate rock n' roll romance from Kylie Scott.

Mal Ericson, drummer for the world famous rock band Stage Dive, needs to clean up his image fast - at least for a little while. Having a good girl on his arm should do the job just fine. Mal doesn't plan on this temporary fix becoming permanent, but he didn't count on finding the one right girl.

Anne Rollins never thought she'd ever meet the rock god who plastered her teenage bedroom walls - especially not under these circumstances. Anne has money problems. Big ones. But being paid to play the pretend girlfriend to a wild life-of-the-party drummer couldn't end well. No matter how hot he is. Or could it?

Rock and roll romance triumphs again in this perky sequel to Lick. Scott has a special skill for crafting humorous, genuine characters, with great rapport and sizzling chemistry in the bedroom . . . Another fun title in a great series. * Library Journal *
Pure rocker perfection in every single way . . . Play is a splendid marriage of romance and comedy, a possibly even better book than its stellar prequel, and I would recommend it to anyone who likes their love stories with a side of giggles. * Natasha Is a Book Junkie *
Kylie Scott is quickly becoming one of my favorite authors at combining funny with sexy, and I can't wait to read more from her. Play is a definite must-read book! * The Smut Books Club *

GOR007952120
Play by Kylie Scott
Kylie Scott
Stage Dive
Used - Like New
Paperback
Pan Macmillan
2014-08-28
320
1447260546
9781447260547
N/A
Book picture is for illustrative purposes only, actual binding, cover or edition may vary.
This is a used book - there is no escaping the fact it has been read by someone else and it will show signs of wear and previous use. Overall we expect it to be in very good condition, but if you are not entirely satisfied please get in touch with us.