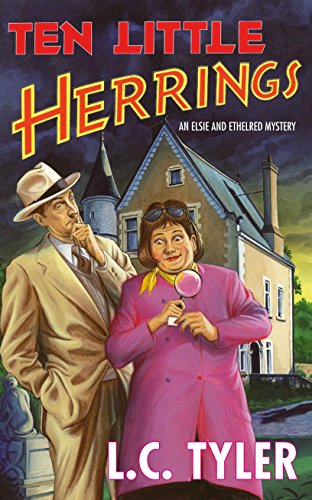 In Stock
£9.99
The brilliant follow-up to `a classic detective novel' (Scotsman)
Very Good Good
5 in stock

When obscure crime writer Ethelred Tressider vanishes, his dogged literary agent, Elsie Thirkettle, is soon on his trail. Finding him (in a ramshackle hotel in the French Loire) proves surprisingly easy. Bringing him home proves more difficult than expected - but (as Elsie observes) who would have predicted that, in a hotel full of stamp collectors, the guests would suddenly start murdering each other?

One guest is found fatally stabbed, apparently the victim of an intruder. But when a rich Russian oligarch also dies, in a hotel now swarming with policemen, suspicion falls on the remaining guests.

Elsie is torn between her natural desire to interfere in the police investigation and her urgent need to escape to the town's chocolaterie. Ethelred, meanwhile, seems to know more about the killings than he is letting on. Finally the time comes when Elsie must assemble the various suspects in the Dining Room, and reveal the truth . . . Ten Little Herrings is a brilliantly anarchic take on the classic Country House Mystery, and an uproarious sequel to the first Elsie and Ethelred mystery, The Herring Seller's Apprentice.

Praise for The Herring Seller's Apprentice, the first Elsie and Ethelred Mystery:

L. C. Tyler was born in Essex and educated in Southend and at Oxford University. He has worked in Hong Kong, Malaysia, Sudan, Denmark, Norway, Sweden and Finland. He currently lives in Islington with his wife, children and border terrier.

GOR001215237
Ten Little Herrings by L. C. Tyler
L. C. Tyler
Used - Very Good
Hardback
Pan Macmillan
2009-08-07
256
0230714676
9780230714670
Short-listed for CrimeFest Awards Goldsboro Last Laugh Award 2010 (UK)
Book picture is for illustrative purposes only, actual binding, cover or edition may vary.
This is a used book - there is no escaping the fact it has been read by someone else and it will show signs of wear and previous use. Overall we expect it to be in very good condition, but if you are not entirely satisfied please get in touch with us.