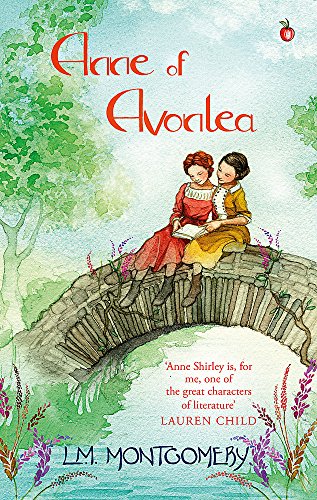 The second book in the Anne Shirley series.

'Having adventures comes natural to some people,' said Anne serenely. 'You just have a gift for them or you haven't.'

Five years ago, Anne arrived at Avonlea a skinny orphan without a friend in the world; now it would be impossible to imagine Green Gables without her. Anne's high spirits and warm heart have won her a family and friends who love her. But when she starts a job as a teacher at her old school, the real test of her character begins: at 'half past sixteen', she's not much older than her pupils and has a lot to prove. How can she inspire a love of learning in young minds - especially when some of her students are even naughtier than she ever was?

This is a collection of the best children's literature, curated by Virago, which will be coveted by children and adults alike. These are timeless tales with beautiful covers, that will be treasured and shared across the generations. Some titles you will already know; some will be new to you, but there are stories for everyone to love, whatever your age. Our list includes Nina Bawden (Carrie's War, The Peppermint Pig), Rumer Godden (The Dark Horse, An Episode of Sparrows), Joan Aiken (The Serial Garden, The Gift Giving) E. Nesbit (The Psammead Trilogy, The Bastable Trilogy, The Railway Children), Frances Hodgson Burnett (The Little Princess,The Secret Garden) and Susan Coolidge (The What Katy Did Trilogy). Discover Virago Children's Classics.

L. M. Montgomery was born in 1874 on Prince Edward Island, Canada, where she spent her childhood living with her grandparents in an old farmhouse. A prolific writer, she published many short stories, poems and novels, many of which were inspired by the years she spent on the beautiful Prince Edward Island. Anne of Green Gables and its sequels have always been amongst the most popular of children's classics. Montgomery died in Toronto in 1942 and was buried on her beloved island.

GOR008610839
Anne of Avonlea by L. M. Montgomery
L. M. Montgomery
Anne of Green Gables
Used - Very Good
Paperback
Little, Brown Book Group
2017-03-02
352
0349009384
9780349009384
N/A
Book picture is for illustrative purposes only, actual binding, cover or edition may vary.
This is a used book - there is no escaping the fact it has been read by someone else and it will show signs of wear and previous use. Overall we expect it to be in very good condition, but if you are not entirely satisfied please get in touch with us.