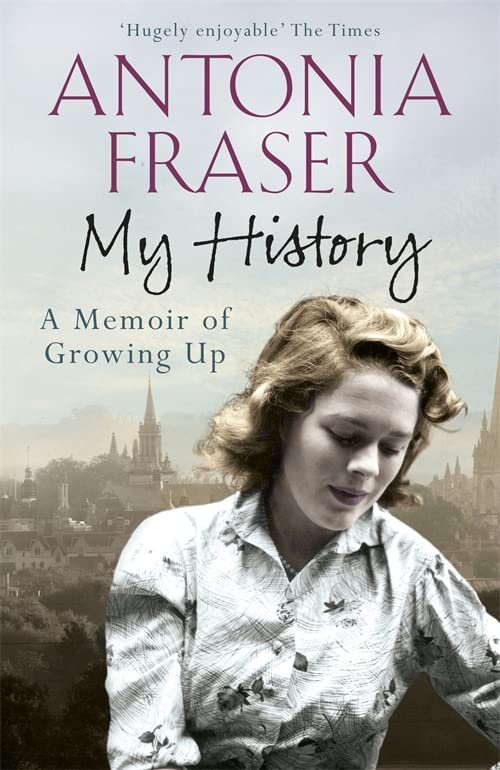 My History by Lady Antonia Fraser

The childhood and early life memoir of Antonia Fraser, one of our finest narrative historians.

My History: A Memoir of Growing Up by Lady Antonia Fraser

The childhood and early life memoir of Antonia Fraser, one of our finest narrative historians.

Antonia Fraser's magical memoir describes growing up in the 1930s and '40s, but its real concern is with her growing love of history. A fascination that began with reading Our Island Story and her evacuation to an Elizabethan manor house at the beginning of the Second World War soon developed into an enduring passion, becoming, in her own words, 'an essential part of the enjoyment of life'.

My History follows Antonia's relationship with her family: she was the eldest of eight children. Her parents Frank and Elizabeth Pakenham, later Lord and Lady Longford, were both Labour politicians. Then there are her adventures as a self-made debutante before Oxford University and a fortunate coincidence that leads to her working in publishing. It closes with the publication of her first major historical work, Mary Queen of Scots - a book that became a worldwide bestseller.

Told with inimitable humour and style, this is an unforgettable account of one person's journey towards becoming a writer - and a historian.

Antonia Fraser is the author of many widely acclaimed historical works which have been international bestsellers. She was awarded the Medlicott Medal by the Historical Association in 2000 and was made a DBE in 2011 for services to literature.

Her previous books include Mary Queen of Scots, King Charles II, The Weaker Vessel: Woman's Lot in Seventeenth-Century England, which won the Wolfson History Prize, Marie Antoinette: The Journey, Perilous Question: The Drama of the Great Reform Bill 1832 and The King and the Catholics: The Fight for Rights 1829. Must You Go?, a memoir of her life with Harold Pinter, was published in 2010, and My History: A Memoir of Growing Up in 2015. She lives in London.

GOR007212514
9781780227948
1780227949
My History: A Memoir of Growing Up by Lady Antonia Fraser
Lady Antonia Fraser
Used - Very Good
Paperback
Orion Publishing Co
2015-11-05
320
N/A
Book picture is for illustrative purposes only, actual binding, cover or edition may vary.
This is a used book - there is no escaping the fact it has been read by someone else and it will show signs of wear and previous use. Overall we expect it to be in very good condition, but if you are not entirely satisfied please get in touch with us
Trustpilot