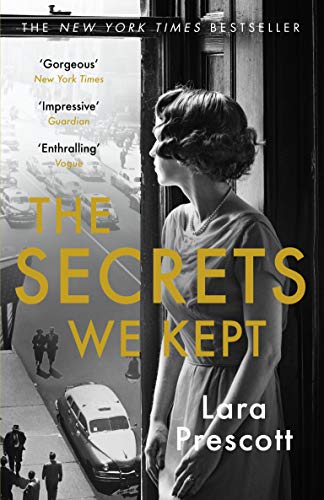 The Secrets We Kept
by Lara Prescott

No one knows that two of them are trading secrets.

The Secrets We Kept Summary

The Secrets We Kept: The sensational Cold War spy thriller by Lara Prescott

No one knows that two of them are trading secrets.

The secret is a book, the size of the one in your hands, and within its pages, a love story that could change the world.

The Secrets We Kept Reviews

What a fantastic novel The Secrets We Kept is. Thrilling, seductive and thoroughly compelling - Lara has created something really special. And it's made me want to re-read Doctor Zhivago! I absolutely loved it! -- SARAH WINMAN
An unusual, stimulating variant on the standard spy thriller. * THE TIMES *
A publishing phenomenon; but more importantly, it is a thoroughly enjoyable read. * GUARDIAN *
Enthralling... This is a rare page-turner with prose that's as wily as its plot. * VOGUE *
A riveting story of secrets, forbidden passions and the dark arts of espionage. I couldn't put it down. -- LISA JEWELL
A fascinating true-life tale has been embroidered into a thrilling story that has it all - turbulent historical events, romantic love (some thwarted, some forbidden) and very cool spycraft. This captivating novel is so assured that it's hard to believe it's a debut - and very easy to see why there's huge buzz around it. * SUNDAY MIRROR *
This addictive debut uses the true story behind the publication of Dr Zhivago to spin a tale of spies, love and betrayal. * THE TIMES *
A page-turner combining elements of spy, literary, thriller, historic, romantic and gay fiction ... This is escapist fiction rooted in an at times harrowing historical reality... An unusual and stimulating Cold War spy thriller. * SUNDAY TIMES *
There's something of Mad Men about this book and you can't get higher praise than that... Proving that fact can be stranger than fiction, this is the perfect book for some much-needed escapism. Cut yourself off and drink it all in. * STYLIST *
Irresistibly charged and vividly imagined, it's told with a breezy confidence that sets the pages flying. * MAIL ON SUNDAY *

Lara Prescott was named after the heroine of Doctor Zhivago and first discovered the true story behind the novel after the CIA declassified 99 documents pertaining to its role in the book's publication and covert dissemination.

She travelled the world - from Moscow and Washington, to London and Paris - in the course of her research, becoming particularly interested in political repression in both the Soviet Union and United States and how, during the Cold War, both countries used literature as a weapon.

Lara earned her MFA from the Michener Center for Writers. She lives in Austin, Texas with her husband.

GOR010519430
The Secrets We Kept: The sensational Cold War spy thriller by Lara Prescott
Lara Prescott
Used - Like New
Paperback
Cornerstone
2020-03-17
480
1786090740
9781786090744
N/A
Book picture is for illustrative purposes only, actual binding, cover or edition may vary.
The book has been read, but looks new. The book cover has no visible wear, and the dust jacket is included if applicable. No missing or damaged pages, no tears, possible very minimal creasing, no underlining or highlighting of text, and no writing in the margins.