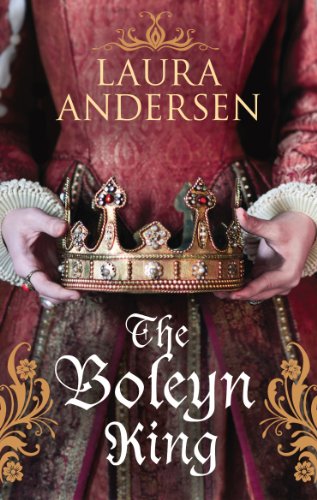 The Boleyn King
by Laura Andersen

Used Price
£4.49
New RRP £12.99
Free Shipping in the UK
Long live Henry IX! Just seventeen years old, King Henry IX, known as William, is anxious to prove himself. Against a tide of secrets, betrayal, and murder, William finds himself fighting for the very soul of his kingdom - and for his right to marry for love not duty.
Reviews:
Trustpilot
Very Good Good

The Boleyn King by Laura Andersen

Long live Henry IX! Just seventeen years old, King Henry IX, known as William, is anxious to prove himself. With the French threatening war and the Catholics' rebellion, he trusts only three people: his older sister Elizabeth; his loyal counsellor, Dominic; and Minuette, a young orphan raised as a royal ward by William's mother, Anne Boleyn. Against a tide of secrets, betrayal, and murder, William finds himself fighting for the very soul of his kingdom - and for his right to marry for love not duty. . .

"Imaginative . . . an exciting, action-driven plot containing strong doses of both intrigue and romance... an original and entertaining read that's reminiscent of the best of Philippa Gregory" * Library Journal *
"Gripping . . . Andersen delves into an alternative Tudor England geared to rivet period fans and newcomers alike. . . . Perfect for Philippa Gregory fans" * Booklist *
"A surprising gem and a thoroughly enjoyable read" * Historical Novels Review *
"[The Boleyn King] alive with historical flair and drama, satisfies both curious and imaginative Tudor aficionados. . . . Her multidimensional characters are so real that readers will wish it was history and eagerly await the next in the trilogy" * RT Book Reviews *
"A wonderfully imaginative and well-written tale of intrigue, high court politics and desperate love" * Deseret News *

Laura Andersen has one husband, four children, and a university degree in English that she puts to non-profitable use by reading everything she can lay her hands on. Books, shoes, and travel are her fiscal downfalls, which she justifies because all three `take you places.' She loves the ocean (but not sand), forests (but not camping), good food (but not cooking), and shopping (there is no downside.) She lives in Massachusetts with her family. To find out more visit: http://www.lauraandersenbooks.com or follow Laura on twitter @LauraSAndersen

GOR005658480
The Boleyn King by Laura Andersen
Laura Andersen
Anne Boleyn Trilogy
Used - Very Good
Paperback
Ebury Publishing
2014-06-02
368
009195648X
9780091956486
N/A
Book picture is for illustrative purposes only, actual binding, cover or edition may vary.
This is a used book - there is no escaping the fact it has been read by someone else and it will show signs of wear and previous use. Overall we expect it to be in very good condition, but if you are not entirely satisfied please get in touch with us.