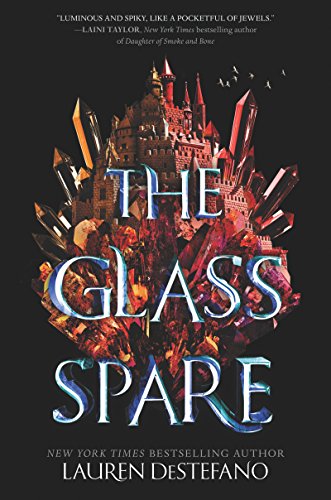 The Glass Spare
by Lauren DeStefano

In Stock
£4.99
A gorgeously told fantasy tale, the first in a duology, from the "New York Times"-bestselling author of the Chemical Garden trilogy about a princess who discovers she's cursed to turn any living thing she touches to gemstone.
Like New Very Good
Only 1 left

The Glass Spare by Lauren DeStefano

The first in a new fantasy duology, The Glass Spare is a gorgeously told tale of love, loss, and deadly power from Lauren DeStefano, the bestselling author of the Chemical Garden series. Perfect for fans of Shannon Hale and Renee Ahdieh.

Wilhelmina Heidle, the fourth child and only daughter of the king of the world's wealthiest nation, has grown up in the shadows. Kept hidden from the world in order to serve as a spy for her father-whose obsession with building his empire is causing a war-Wil wants nothing more than to explore the world beyond her kingdom, if only her father would give her the chance.

Until one night Wil is attacked, and she discovers a dangerous secret. Her touch turns people into gemstone. At first Wil is horrified-but as she tests its limits, she's drawn more and more to the strange and volatile ability. When it leads to tragedy, though, Wil is forced to face the destructive power within her and finally leave her home to seek the truth and a cure.

But finding the key to her redemption puts her in the path of a cursed prince who has his own ideas for what to do with Wil's power.

With a world on the brink of war and a power of ultimate destruction, can Wil find a way to help the kingdom that's turned its back on her, or will she betray her past and her family forever?

"Readers will be eager to reenter this world of scheming kings and banished heirs, where nothing is quite as it seems." -- Bulletin of the Center for Children's Books (starred review)
"If there was a company that offered dangerous vacations inside of books, I would want to go into this one, and travel the skies and seas with its vexing, honorable liars. Wil's journey dazzles, and DeStefano's writing entrances. This book is luminous and spiky, like a pocketful of jewels." -- Laini Taylor, New York Times bestselling author of Daughter of Smoke and Bone
"Brilliantly crafted, this fantasy will make you believe in magic. Only someone with a heart of stone will be able to turn away from Wil's story." -- Beth Revis, New York Times bestselling author of Across the Universe and A World Without You
"DeStefano has penned a book of exquisite parts-a spiked exterior of brutal magic and a deep core of tender human relationships-that ultimately coalesce into a sharp, scintillating whole. The Glass Spare will leave you wonderstruck." -- Traci Chee, New York Times bestselling author of The Reader
"A captivating and well-written fantasy adventure." -- Booklist
"Richly imagined...[and] engrossing...A unique, adventurous fantasy." -- School Library Journal
"Bursting with intrigue, mystery, [and] danger" -- Voice of Youth Advocates (VOYA)

Lauren DeStefano earned her BA in English with a concentration in creative writing from Albertus Magnus College in Connecticut in 2007. She is the New York Times bestselling author of the Chemical Garden trilogy and The Glass Spare. You can find her online at twitter.com/laurendestefano and instagram.com/laurendestefanoauthor.

GOR010295700
The Glass Spare by Lauren DeStefano
Lauren DeStefano
Glass Spare
Used - Like New
Hardback
HarperCollins Publishers Inc
2017-11-20
416
0062491288
9780062491282
N/A
Book picture is for illustrative purposes only, actual binding, cover or edition may vary.
The book has been read, but looks new. The book cover has no visible wear, and the dust jacket is included if applicable. No missing or damaged pages, no tears, possible very minimal creasing, no underlining or highlighting of text, and no writing in the margins.