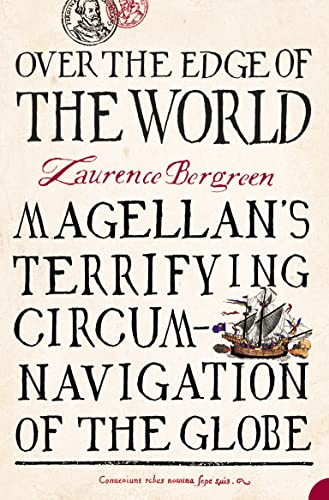 Over the Edge of the World
by Laurence Bergreen

The astonishing tale of the first sea voyage to circumnavigate the entire globe. Magellan's dramatic maritime expedition in 1519 discovered the straits that enabled Europe to trade with the Eastern spice islands and changed the course of history.

Over the Edge of the World Summary

Over the Edge of the World by Laurence Bergreen

The astonishing tale of the first sea voyage to circumnavigate the entire globe. Magellan's dramatic maritime expedition in 1519 discovered the straits that enabled Europe to trade with the Eastern spice islands and changed the course of history.

In an era of intense commercial rivalry between Spain and Portugal, Ferdinand Magellan, a Portuguese navigator sailed to explore the undiscovered parts of the world and claim them for the Spanish crown in one of the largest and best-equipped expeditions ever mounted in the Age of Discovery. Yet of the fleet of five vessels under his command, only Victoria was to return to Spain after three harrowing years, her captain murdered, more than two hundred of her sailors dead from scurvy, torture, execution and drowning, and a small, ravaged crew that survived to tell the extraordinarily dramatic story.

Accomplished despite the fact that European mariners were exploring a world that was unmapped and misunderstood, where superstition held sway and there were real fears that you could literally sail over the edge of the world, that sea monsters lurked in the briny depths, or that if you passed the equator, the ocean would boil and scald you to death, this was a truly spectacular achievement.

The shockingly explicit diaries of Antonio Pigafetta reveal much of the story. This is a many-layered book - a voyage into history, a tour of the world as it was emerging from the Middle Ages into the Renaissance, an anthropological account of exotic tribes and a chronicle of a desperate grab for political and commercial power. It is also a gripping adventure story, compelling and full of suspense and drama.

Over the Edge of the World Reviews

`Illuminating the age of discovery, Bergreen writes this powerful tale of adventure with a strong presence and rich detail.' Publishers' Weekly

Laurence Bergreen is the author of the highly acclaimed biographies Capone: The Man and his Era, As Thousands Cheer: The Life of Irving Berlin, James Agee: A Life and Louis Armstrong: An Extravagant Life. His most recent book is the story of NASA's quest For Mars.

GOR007979862
Over the Edge of the World by Laurence Bergreen
Laurence Bergreen
Used - Like New
Paperback
HarperCollins Publishers
2005-01-27
496
0007198558
9780007198559
N/A
Book picture is for illustrative purposes only, actual binding, cover or edition may vary.
The book has been read, but looks new. The book cover has no visible wear, and the dust jacket is included if applicable. No missing or damaged pages, no tears, possible very minimal creasing, no underlining or highlighting of text, and no writing in the margins.