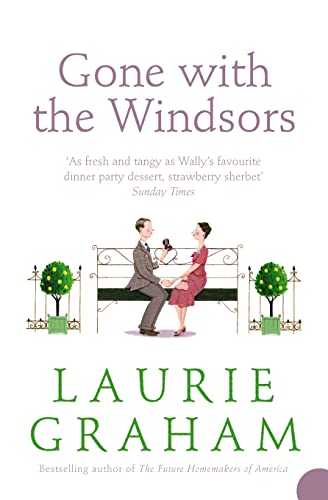 Gone With the Windsors
by Laurie Graham

The hilarious and touching novel from Laurie Graham - the fictional diary of the Queen's best friend in pre-war London.

Gone With the Windsors Summary

Gone With the Windsors by Laurie Graham

The hilarious and touching novel from Laurie Graham - the fictional diary of the Queen's best friend in pre-war London.

Laurie Graham's brilliant novel is the fictional diary of Maybell Brumby, a wealthy American widow who arrives in London in 1932 and discovers that an old school friend is in town: Bessie Wallis Warfield, now Mrs Ernest Simpson. Maybell and Wally are made for one another. One has money and a foothold in high society, courtesy of a sister who married well. The other has ruthless ambition and enough energy to power the National Grid. Before the year is out, Wally has begun her seduction of the Prince of Wales, and as she clambers towards the throne she makes sure Maybell and her cheque book are always close at hand.

So Maybell becomes an eye-witness to the Abdication Crisis. From her perch in Carlton Gardens, home of her influential brother-in-law Lord Melhuish, she has the perfect vantage point for observing the anxious, changing allegiances for and against Queen Wally, and the political contours of pre-war London.

When the crisis comes and Wally flees to the south of France, she insists on Maybell going with her. 'Are you sure that's advisable, darling?' asks the King. 'Of course it is,' snaps Wally. 'She's the Paymaster General.' Maybell's diary records the marriage, the Windsors' exile, and the changing complexion of the Greatest Love Story. It takes the sound of German jackboots at the gate and personal tragedy to make her close its pages for the last time.

Gone With the Windsors Reviews

'Told in the breathless style of Anita Loos's "Gentlemen Prefer Blondes", but with the waspish humour of Nancy Mitford, the novel captures the mood of the era with near-flawless accuracy.' The Times

'The story of Edward, Mrs Simpson and the abdication crisis might be familiar enough. Graham's gift is imagining the details.' Daily Mail

`Refreshing, honest and very funny. It's the best kind of popular women's fiction - enjoyable without being thoughtless, smart without being superficial.' The Scotsman

`As fascinating for what it says about the interwar traffic between British and American high society as the ensuing scandal at court.' Emma Hagestadt, Independent

`The story is an absolute pleasure to read from start to finish. By infusing her sharp satire and meticulous social observation with a certain sweetness, Laurie Graham proves herself a master of showing without ever needing to tell.' Kate Riordan, Time Out

Laurie Graham is the author of eight novels. `The Ten O'Clock Horses' was shortlisted for the Encore Award and dramatized for Radio 4, as was `Perfect Meringues'. Laurie is a former Daily Telegraph columist and contributing editor to She magazine, and wrote the bestselling `Parents' Survival Guide'. In addition to her novels, she writes original dramas and adaptations for BBC Radio. Her ten-episode dramatization of `Little Women' was broadcasted on Woman's Hour.

GOR000474942
Gone With the Windsors by Laurie Graham
Laurie Graham
Used - Very Good
Paperback
HarperCollins Publishers
2006-07-03
512
0007146760
9780007146765
N/A
Book picture is for illustrative purposes only, actual binding, cover or edition may vary.
This is a used book - there is no escaping the fact it has been read by someone else and it will show signs of wear and previous use. Overall we expect it to be in very good condition, but if you are not entirely satisfied please get in touch with us.