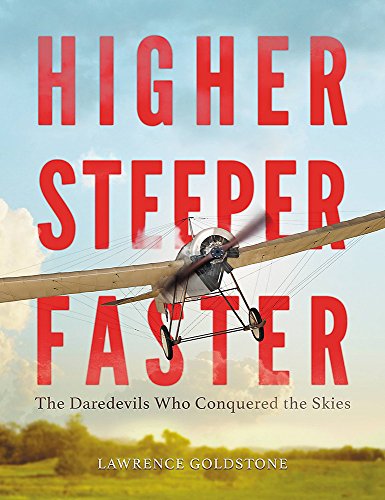 In Stock
£10.99
A fresh look at the history of aviation that takes middle grade nonfiction to new heights!
Very Good
Only 1 left

Higher, Steeper, Faster: The Daredevils Who Conquered the Skies by Lawrence Goldstone

Discover the daring aviation pioneers who made the dream of powered flight a reality, forever changing the course of history.

Aviator Lincoln Beachey broke countless records: he looped-the-loop, flew upside down and in corkscrews, and was the first to pull his aircraft out of what was a typically fatal tailspin. As Beachey and other aviators took to the skies in death-defying acts in the early twentieth century, these innovative daredevils not only wowed crowds, but also redefined the frontiers of powered flight.

Higher, Steeper, Faster takes readers inside the world of the brave men and women who popularized flying through their deadly stunts and paved the way for modern aviation. With heart-stopping accounts of the action-packed race to conquer the skies, plus photographs and fascinating archival documents, this book will exhilarate readers as they fly through the pages.

*"For those who love history, aviation, or stories of great daring, this is pure pleasure."
--Kirkus Reviews, starred review

"This look at the early days of the industry highlights the thrill and awe of a watching public as well as the fact that the sky was no longer any sort of boundary."--Booklist
*"Goldstone deftly combines captivating descriptions of the personalities--male and female--with discussion of the many improvements and ever-present hazards of early flying."--Publishers Weekly, starred review

"Armchair thrillseekers will settle in and read this one straight through."
--BCCB

Lawrence Goldstone is the author and co-author of more than a dozen critically-acclaimed books for adults. Goldstone has appeared on NPR, PBS, and C-SPAN, and his writing has been featured in The Wall Street Journal, The Boston Globe, and the Los Angeles Times, among others. This is his first book for young readers.

GOR009933869
Higher, Steeper, Faster: The Daredevils Who Conquered the Skies by Lawrence Goldstone
Lawrence Goldstone
Used - Very Good
Hardback
Little, Brown & Company
2017-03-28
208
0316350230
9780316350235
N/A
Book picture is for illustrative purposes only, actual binding, cover or edition may vary.
This is a used book - there is no escaping the fact it has been read by someone else and it will show signs of wear and previous use. Overall we expect it to be in very good condition, but if you are not entirely satisfied please get in touch with us.