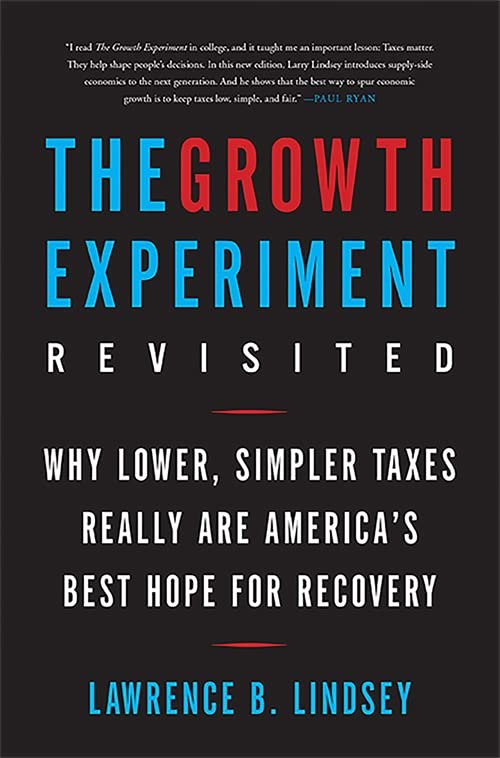 In Stock
£3.29
From the chief architect of the controversial Bush tax cuts, an updated edition of one of the classic texts on the subject of tax rates and growth.
Very Good
Only 1 left

The first edition of The Growth Experiment , originally published in 1990 as a response to critics of the Reagan-era tax cuts, became a kind of bible for proponents of supply-side economics. This new and updated edition, which explores the economic effects of America's tax policy over the last five presidential administrations, makes a bold and timely argument against the centrepiece of Obama's economic policy,increasing taxes on the wealthy. Lawrence Lindsey provides a data-rich argument showing that because of changes in human behaviour prompted by tax cuts, lowering taxes on the wealthy costs" the treasury far less than most economists calculate and creates an economic boon to middle and lower income earners. Sure to be controversial, The Growth Experiment Revisited is essential reading for anyone looking to understand the arguments at the heart of this most fractious of American policy debates.

"A valuable project... Lindsey makes a convincing case that Mr. Bush doesn't receive nearly the credit he deserves for steering the economy clear of a mini-depression in the early 2000s... What is beyond dispute, after reading Mr. Lindsey's book, is that tax rates have a direct effect on the health of the economy, a lesson that the current Obama administration has chosen to ignore." --The Wall Street Journal "I read The Growth Experiment in college, and it taught me an important lesson: Taxes matter. They help shape people's decisions. In this new edition, Larry Lindsey introduces supply-side economics to the next generation. And he shows that the best way to spur economic growth is to keep taxes low, simple, and fair." --Paul Ryan "This book was the Wall Street Journal editors' primer when it came out, and can serve as a primer again for all who value growth today. Lindsey is that rare figure in economics, both sage and honest broker. His magnanimity and wisdom shine a light on the economic topic, illuminating our (tax) path forward." --Amity Shlaes, author of Coolidge

Lawrence Lindsey is President and Chief Executive Officer of The Lindsey Group and one of the chief architects of the Bush tax cuts. Lindsey lives in Northern Virginia.

PART I The Great Experiment: The 1980s 1. The Revolution of '81 2. The Psychic Taxpayer 3. Camelot Capitalism and Keynesian Crisis 4. The Great Experiment 5. Did the Rich Get Richer? 6. Who Made the Deficit? 7. Why No Inflation? 8. A Deluge of Debt? 9. The World's Tax Cut 10. One Step Sideways 11. Of Revenue and Righteousness 12. The Great Surplus of '99 PART II Updating the Lessons: The New Century 13. That Was Then, This Is Now 14. The Roaring Nineties 15. The Bubble Years 16. The Bubble Bursts: Patching It Using Keynesian Policies with a Supply-Side Twist 17. Forward: Deeper Into the Morass 18. Pro-Growth Tax Policy for the Twenty-First Century

GOR008229249
The Growth Experiment Revisited: Why Lower, Simpler Taxes Really Are America's Best Hope for Recovery by Lawrence Lindsey
Lawrence Lindsey
Used - Very Good
Paperback
INGRAM PUBLISHER SERVICES US
2013-09-10
320
0465050700
9780465050703
N/A
Book picture is for illustrative purposes only, actual binding, cover or edition may vary.
This is a used book - there is no escaping the fact it has been read by someone else and it will show signs of wear and previous use. Overall we expect it to be in very good condition, but if you are not entirely satisfied please get in touch with us.