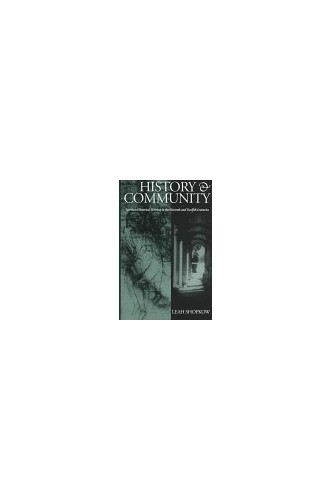 History and Community
by Leah Shopkow

In Stock
£55.99
This study considers the functions and meanings of history. Using medieval histories as an example, it demonstrates that historical writing is neither simply a source of data on times past nor a form of disintereted literary expression.
Very Good
Only 1 left

History and Community: Norman Historical Writing in the Eleventh and Twelfth Centuries by Leah Shopkow

Norman historians have never been systematically studied, but the tradition of historical writing they created offers valuable insight into the nature of Latin historical writing in the eleventh and twelfth centuries. This book, the first to treat the Norman tradition as a whole, considers not only what the Normans wrote and what methods and models they used, but also how history was used in Normandy and who read it.

Historical writing is one of the ways in which communities create themselves or imagine themselves into being. In the eleventh century, Norman historians wrote Normandy's history as a comedic adventure, in which Normans triumphed at home and abroad. In the twelfth century, their histories took a more pessimistic tone, depicting Norman glory as threatened or eclipsed. Such histories told the Normans who they were or might be by telling them who they had been. The need for cultural reenforcement was strongest just after periods of social disruption--when dukes claimed new powers or the elite attempted to assert their independence of ducal authority or monasteries attempted to preserve their religious autonomy. Consequently, histories were the product of power relations, and were produced where power was at stake.

The histories sponsored by Norman dukes circulated widely, while other histories were locally read or languished without readers. There was, as yet, no spontaneous audience for history, just as there were no agreed-upon conventions or methodologies for its composition. The potential audience, however, grew in the later Middle Ages as great princes and individuals alike found ways to use history, which in turn led to its wider dissemination and to increased methodological development.

Leah Shopkow presents an insightful study of the functions and meanings of history. She makes clear that historical writing is neither simply a source for data on times past nor a form of disinterested literary expression. Medieval histories were complex cultural phenomena. Her study will be of great interest to historiographers and will become a standard work for Normanists and Anglo-Normanists.

Leah Shopkow is associate professor of history at Indiana University.

""By focusing on Latin historical writing in the duchy of Normandy during the apogee of its power in the eleventh and twelfth centuries, Shopkow has managed to span part of the gap between the many broad theoretical treatments of medieval historiography and the narrow examinations of single authors or works.""--Choice

""Necessary reading for anyone working with the historians whom it analyzes and deserves a place on the shelf of recent, exciting dissections of the corpus of medieval works of history.""--Albion

""This impressive work casts fresh light on a topic of the first importance: the contemporary historians of medieval Normandy. Shopkow's scholarship stands out for its interdisciplinary grasp of both historical and literary materials and for its sensitivity to new methodological techniques.""--C. Warren Hollister, University of California, Santa Barbara

1. History in the County of Normandy

3. The Glorious Norman Past

6. The Purpose of History

7. Patrons and Other Readers: The Reception of Norman Histories

Conclusion: The Propagation of Historical Writing in Medieval Europe

GOR010199438
History and Community: Norman Historical Writing in the Eleventh and Twelfth Centuries by Leah Shopkow
Leah Shopkow
Used - Very Good
Hardback
The Catholic University of America Press
1997-06-30
327
0813208823
9780813208824
N/A
Book picture is for illustrative purposes only, actual binding, cover or edition may vary.
This is a used book - there is no escaping the fact it has been read by someone else and it will show signs of wear and previous use. Overall we expect it to be in very good condition, but if you are not entirely satisfied please get in touch with us.