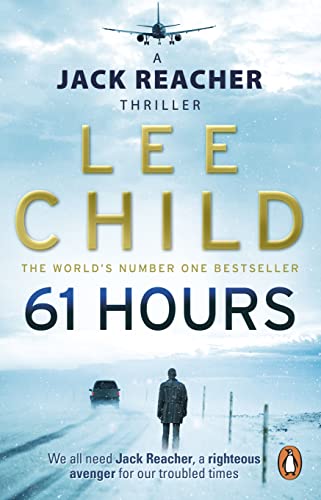 Used Price
£2,99
New RRP £7,99
Free Shipping in the UK
GET READY FOR THE MOST EXCITING COUNT-DOWN OF YOUR LIFEHOUR SIXTY-ONE Icy winter in South Dakota. On the back seat: Jack Reacher, hitching a ride to nowhere.HOUR ZEROHas Reacher finally met his match?NOW READ THE SEQUEL: Although the Jack Reacher novels can be read in any order, the ending of 61 Hours is directly followed by Worth Dying For.
Very Good Good Well Read

GET READY FOR THE MOST EXCITING COUNT-DOWN OF YOUR LIFE HOUR SIXTY-ONE Icy winter in South Dakota. A bus skids and crashes in a gathering storm. On the back seat: Jack Reacher, hitching a ride to nowhere. A life without baggage has many advantages. And disadvantages too, like facing the arctic cold without a coat. HOUR THIRTY-ONE A small town is threatened by sinister forces. One brave woman is standing up for justice.If she's going to live to testify, she'll need help from a man like Reacher.Because there's a killercoming for her. HOUR ZERO Has Reacher finally met his match? He doesn't want to put the world to rights. He just doesn't like people who put it to wrongs. NOW READ THE SEQUEL: Although the Jack Reacher novels can be read in any order, the ending of 61 Hours is directly followed by Worth Dying For.

"Child has somehow forged that magical grail: a new and believable hero. Reacher is strong, tall, principled and a quiet master in unarmed combat. But he's also a wizard at determining likelihoods, at extrapolating miniscule details and thus forming chains of inferred logic... celebrate the achievement of giving us addicts a new and mesmerising fix, when we thought all the heroes had been written" -- Euan Ferguson * Observer *
"It is always a pleasure to read another Jack Reacher novel. A kind of highlight of the year, really. There is only one downside. It's all the other people hanging around your house saying things like, "Oy! Haven't you finished with the Reacher yet?" -- Andy Martin * Independent *
"Reacher is an iconic modern thriller hero: the ultimate loner... won't disappoint the British-born Child's millions of fans... Fast, compelling and with that nugget of poignancy that sets the hero apart" * Daily Mail *
"Explodes into one of the best thrillers I've read for ages. Lee Child is a Brit who has managed to becomes more American than most US authors... 61 Hours is destined to do big things... Superb stuff!" * Independent on Sunday *
"This is the first of Lee Child's popular Jack Reacher novels I've read. I'd assumed they were merely the macho adventures of a boneheaded lone wolf: lots of guns and explosions and little to occupy the mind. Well, I was wrong: there's also an abundance of intelligence and surprise. 61 Hours is a first-class thriller... Child delivers it brilliantly" * Mail on Sunday *

GOR002043388
61 Hours: (Jack Reacher 14) by Lee Child
Lee Child
Jack Reacher
Used - Very Good
Paperback
Transworld Publishers Ltd
2010-09-02
512
0553825569
9780553825565
Winner of Theakston's Old Peculier Crime Novel of the Year 2011 Short-listed for CWA Ian Fleming Steel Dagger 2010
Book picture is for illustrative purposes only, actual binding, cover or edition may vary.
This is a used book - there is no escaping the fact it has been read by someone else and it will show signs of wear and previous use. Overall we expect it to be in very good condition, but if you are not entirely satisfied please get in touch with us.